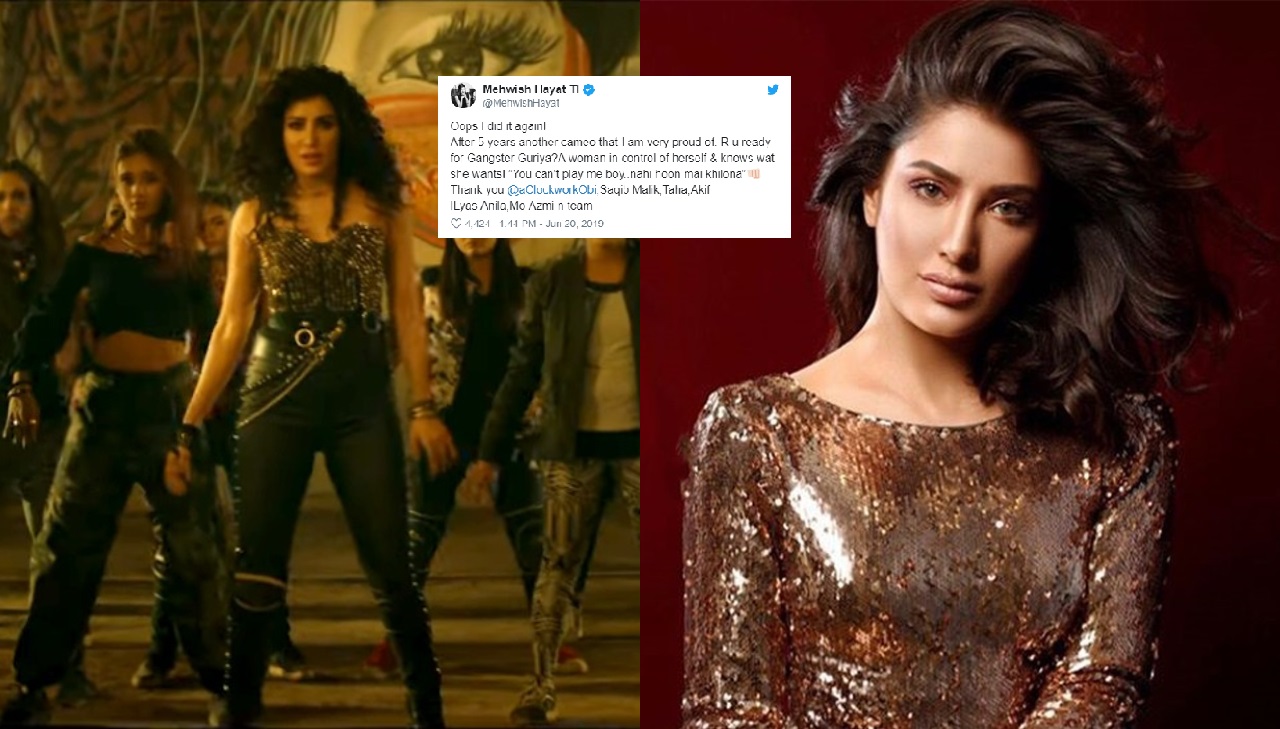 The new target of trolls on the internet is Mehwish Hayat aka Gangster Guriya. If you’ve been catching up on Baaji the upcoming release of Meera then you must have watched the item song featuring Mehwish Hayat.

As soon as it was released, it caught every eye’s attention. Some stunned by the dark and bold look of the Gangster Guriya, while the others got busy in criticizing the song for its vulgarity. But no cares given from Mehwish to the critics.

“A woman in control of herself & knows what she wants,” were the words of Mehwish in the tweet where she vividly shared the first look of her item number Gangster Guriya. She has done two other item numbers in the past ‘Billi’ from Na Maloom Afraad and ‘Chirya’ from Chalaawa. So, it was obvious that Mehwish knew she’ll be getting a lot of criticism on the song. And she did get it, probably even more than usual.

People bashed at her for disgracing the honorary award of Tamgha-e-Imtiaz by doing an item song again.

Some suggested not to go all Bollywood with short tops and leather pants. To do something different and develop our own style.

Oh ma’am.. you tried hard to dance like Katrina.. but let me tell you one thing…
Thats not BOLLYWOOD. We have to work differently .
We can’t remake their films. We have to work like US.
We don’t wear small tops or leather pants or shorts.
Let’s be proud of being Pakistani .

Mehwish’s caption triggered the awaam much because she had pre-addressed the criticism that she was going to get on it. She started her post with “Oops, I did it again” obviously bringing up the fact that the opinions of people on her previous item numbers meant nothing to her. So here she is with another one. Say what you think, do what you want but Mehwish is unbothered. Your opinions can’t make her feel bad about what she chose to do.

She is proud of it and you can’t play her because she’s the real Gangster in the town of twitter now.

Also Read: Mehwish Hayat Does Her First Item Number in Na Maloom Afraad – This First Look Will Blow Your Mind.

However, a day later Mehwish followed up to the criticism posting another tweet where she mentioned that being a woman her work in the song empowered her.

To do these dance numbers has been my choice. As an actress and performer it is my job. As a woman I find my work empowering. Dance to me is aesthetically the purest form of art. https://t.co/KzGNoXJXhU
Incase you’ve missed it here’s the link ☝?

Moreover, taking down the critics very calmly and positively she conveyed that it was her own decision to do these item numbers. Both her tweets clearly depict that Mehwish is not nervous about her career choices and that her work is empowering and not something that brings her down.

Mehwish says there’s nothing wrong in entertaining people because this is what movies are about, escaping the reality.

Eventually, she got some positive messages too. The fans who appreciated her work:

And they can watch you say it loud and clear here. More power to you @MehwishHayat! ?? pic.twitter.com/mfODURnibn

Mehwish Shared A Video From Rehearsal Of The Song On Twitter

None of the critics managed to bring the gangster guriya down a step. All of them just made her even more sure about herself. So, she decides to post another video of her at the rehearsal of the song, sharing how much effort she puts in her work. How Mehwish almost got her knee fractured at the shoot. Hence, she continues the tweet calling herself a “Jazbaati Adakaara”.

This has to be one of my most fav & toughest steps of the choreography from “Gangster Guriya”. Thank you @aClockworkObi for pushing me & trusting me with these challenging moves. Looked easy but I almost fractured my knee at the shoot being the jazbaati adakaara that I am.?lol pic.twitter.com/52eQFFPU82

She Shared A Video Of Her Icon Madonna

Mehwish’s tweets don’t seem to be heading toward a halt anytime soon. She is the new clap back queen on twitter and looks like she’s enjoying it. Recently, she shared a video of Madonna her icon which quoted her as calling herself a “bad feminist”. It sure inspired Mehwish and intrigued her enough to share it with her followers.

“… I am a bad feminist.” One of my heroes, Madonna speaking at the The Billboard Women in Music event in 2016.. Most inspiring and lots of food for thought . pic.twitter.com/8pynDvtfVU

Moreover, the video from The Billboard Women in Music event 2016 quoted Madonna saying “People say that I’m so controversial but I think the most controversial thing that I have ever done is to stick around.”

No wonder Madonna is Mehwish’s hero because signing up for item songs one after the other is in itself inviting controversy. Plus, we have also been seeing Mehwish live the same badass attitude on criticism as Madonna.

However, people didn’t stay back in criticizing her on that too.

I am getting nauseous by the thought that maddona is someones hero. Apne jaise hi heroes hoty hain bandy k.

Thus, no matter what people say we can’t deny that this Tamgha-e-Imtiaz girl is daring enough to live her life by her rules and the way she takes criticism is impressive.

What do you think about the Clap Back Queen? Let us know in the comments.

Oops! Men Planning Their Second Marriages Now Need ‘Legal’ Consent Apart From Their First Wives!
This Peer Is Thugging Muslim Women Making Them Kiss His Feet And This Is Going Too Far!
To Top