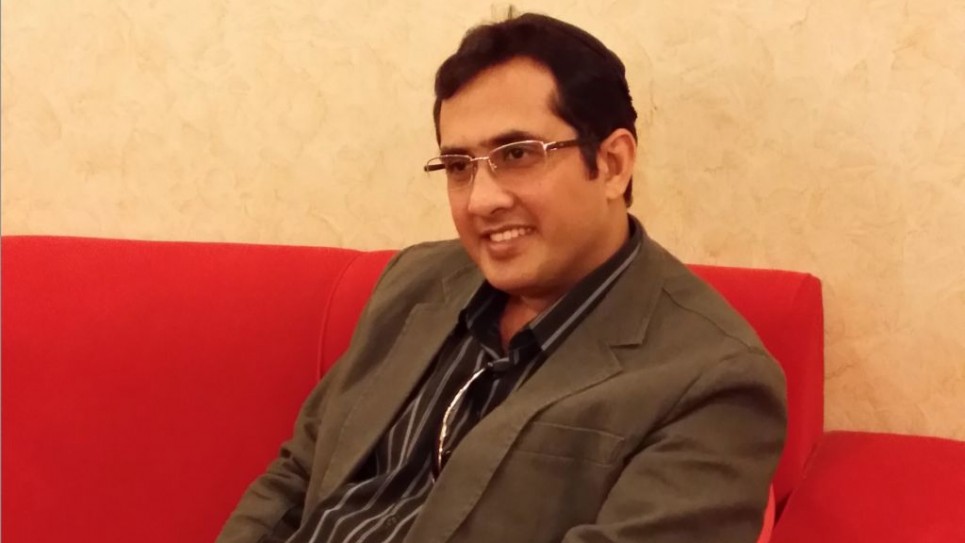 Karachi-born Faisal, aka Fishel, Benkhald, officially registered as a Muslim because of his father’s religion, is seeking to change that status to embrace his mother’s faith — an apostasy theoretically punishable by death.

His real name is Faisal Benkhald, though he recently adopted the Yiddish first name “Fishel.” He was born in Karachi in 1987, the fourth of five children born to a Jewish mother and a Muslim father. Though registered at birth as a Muslim, he considers himself Jewish and is now fighting for state recognition of his chosen religion — an apostasy.

As far as the Pakistani authorities are concerned, Fishel is still Faisal, a Muslim. That’s what’s written on his documentation. But he wouldn’t be the only Jewish Pakistani to have a Muslim identity card: The Jews of Pakistan learned to disappear long ago. Some, like Fishel’s parents, registered their children as Muslims to blend in, and all tried to hide.

In a series of Twitter exchanges and emails in recent weeks, The Times of Israel explored Fishel’s unique story.

His earliest childhood memories include the aroma of his mother’s challah, baking in the oven every Friday afternoon. Before dusk he would watch her recite blessings over the Shabbat candles.

“When she used to put her hands over her eyes it felt so serene as if she has no worries of worldly life, reciting the blessing welcoming the holy day. Her lovely eyes and smile looking at me are engraved in my memory, I always prayed with her.”

He says his mother would prepare only kosher food for him at home. She was born to religious Jewish parents who moved to Pakistan from neighboring Iran. He knows of his maternal grandparents only through the stories his mother told him as a boy.

Fishel is all that remains of what was once a small but thriving Jewish community. Estimated to have numbered about 2,500 people at the start of the 20th century, Pakistani Jewry consisted mainly of migrants from Iraq. Following Israel’s War of Independence in 1948, the central synagogue in Karachi (demolished in 1988) became a focal point for demonstrations against Israel. The majority of Jews left Pakistan for India or Israel around this time.

Fishel’s family spent as much time abroad as possible to escape from oppressive Pakistan. His father was a mechanical engineer whose work ensured they spent long stints living in North Africa. Both parents had died by his 13th birthday.

Once his parents passed away Fishel was sent to live with an uncle, a period of time he is loath to talk about. He’s estranged from two of his brothers and the other two have every intention of ignoring their Jewishness.

Fishel is an anomaly in choosing to reclaim his mother’s heritage.

‘I couldn’t be silent anymore about my Jewish roots’

“After Rosh Hashanah in September 2009, I remember just feeling sick of hearing the constant anti-Semitic propaganda and conspiracy theories popping up from the Pakistani government and media. They are constantly blaming everything wrong on an imaginary Jewish/Israeli conspiracy. My political side outgrew my fear; I felt less hesitant to claim my religion more publicly than I would have before. I couldn’t be silent anymore about my Jewish roots,” says Fishel.

As an adult Fishel chose the same path as his father and became an engineer, also taking short-term positions abroad. Anti-Semitism is the reason, he says, he spends as much time away from his native Pakistan as he can. But he is about to complete a contract in Tunisia, and is now preparing to go back to Pakistan.

Fishel is not planning to reveal his chosen religion to his neighbors and colleagues upon his return, but he is certainly going back with a mission. He intends to enter the National Database and Registration Authority (NADRA) and change his official religious status from Muslim to Jew.

If NADRA permits him to do so (which he thinks is unlikely), he will be committing the crime of apostasy, punishable by death.

“It is dangerous but I will go at least once to record my request to change the status of my religion from Islam to Judaism so that their response can be documented,” says Fishel.

In his quest to discover more about his Jewish identity, Fishel contacted the Institute for Jewish Ideas and Ideals in New York City. He has been guided by the founder and director of the institute, Rabbi Mark Angel, ever since. Fishel hopes together they can unlock more of his heritage.

Speaking from New York, Angel tells The Times of Israel the kind of details he explained to Fishel would help him prove he is halachically Jewish: “If his mother had siblings who continued in their Jewishness, or if his mother’s mother/grandmother are buried in a Jewish cemetery. I don’t think these are easy things for him to find out, but I believe he’s trying his best,” says Angel.

Perhaps this is why Fishel is intending to fulfill his dream of cleaning up the old Beni Israel Jewish graveyard in Karachi. If one of the graves there belongs to a blood relative, he will have a much better chance of persuading halachic authorities of his Jewish roots.

Fishel insists, however, that the goal is wider than his own quest for family knowledge.

“My dream for the near future in Pakistan is to gain some empathy from Pakistani Muslims for cleaning the Jewish graves. Later I will try to harness it in getting support and help in the legal process for a small synagogue in Pakistan. After getting that little piece of paper in my hand stating that legally we are allowed to have a synagogue, my dream will come true,” says Fishel.

Even from his temporary position in Tunisia, Fishel has not been idle in pursuit of this goal. He has repeatedly emailed and called Pakistan’s National Peace Council for interfaith harmony to gain permission to enter the cemetery, though so far with no reply.

Fishel has already snuck into the cemetery on several previous occasions to document the state of the graves. Upon his return he plans to step up his campaign to get the Pakistani government to provide him with the access he needs to clean the Beni Israel graveyard undisturbed.

The derelict Jewish graveyard is located within Karachi’s larger Mewa Shah graveyard. According to Fishel, it has fallen into a state of disrepair and is known as a hangout for drug addicts and criminals.

As part of his quest to help clean the Jewish graves in Karachi, Fishel has taken to Twitter where he goes by the handle @Jew_Pakistani

As part of his quest to help clean the Jewish graves in Karachi, Fishel has taken to Twitter, where he goes by the handle @Jew_Pakistani. It is here that he is searching for help both from sources in Pakistan and the wider Jewish world.

Unfortunately he has also become a magnet for Taliban apologists and often finds himself fighting the cause of Judaism against Islamic extremists.

Fishel knows he is starting from nothing and is looking for all of the help he can get in pursuit of his goals. He has managed to obtain a couple of Jewish books, but not enough to study from, and is looking for more. His thirst for knowledge about Judaism has led him to seek information online. He is now able to celebrate Passover, Yom Kippur, Rosh Hashanah and Shabbat, he says, thanks to recordings of services he has found posted on the web.

Fishel hopes to make Pakistan more tolerant to Jews and promote Pakistani interaction with Israel. Although at first glance these goals might sound insurmountable, there is room for some optimism, says Oxford University expert on Pakistan Dr. Faisal Devji.

“Bizarrely for such an anti-Semitic society, Pakistani school textbooks routinely compare the country to Israel as the world’s only two states founded in the name of religion rather than monarchy, language, ethnicity, etc. So it’s weirdly possible to propagate a pro-Israeli stance there, and indeed there have been a number of public suggestions of recognizing Israel,” says Devji.

Perhaps one day Fishel will be able to take a trip to Israel, but to do so he’d have to negotiate the obstacle of his Pakistani passport, where it is written, he reports, “This passport is valid for all countries of the world except Israel.”

The Article was First Published in The Times of Israel