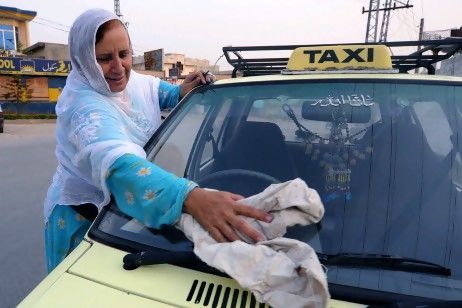 One of the finest examples of empowered women in Pakistan is Ms. Zahida Kazmi.  The 53-year-old female from Islamabad works as a taxi driver. In 1992, she decided to take her fate in her hands and bought a taxi on easy installment through a government initiated employment scheme.

Zahida Kazmi’s husband passed away when she was only 33. Instead of relying on relatives and other family members, Zahida decided to make her own destiny and became a taxi driver.

She was born into a patriarchal, conservative Pakistani family, she went against the will of her family, but with six children to feed, she felt that she had no other choice.

Taking the advantage of a government scheme, she bought herself a yellow cab and drove to Islamabad airport every morning to pick up passengers.

In a dangerous and unpredictable world, Zahida Kazmi at first kept a gun in the car for the sake of her own protection. When she started off, she used to wear burqa to drive her passangers around. With the passage of time her fears dissipated.

Zahida says that she has learned a lot about Pakistan and its people after exposing herself to the bustling city streets of Islamabad and by driving around the rocky and remote areas adjoin the tribal areas of Pakistan. 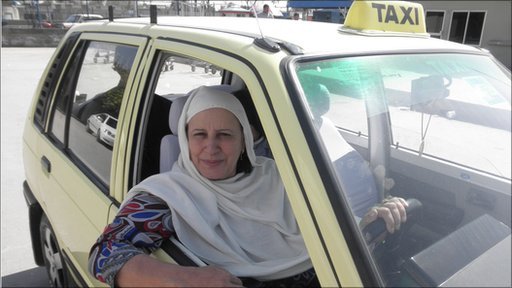 Despite a reputation for fierce male pride and intolerance, the Pathan of the tribal north-west, treated Zahida with immense courtesy on her journeys.

Zahida Kazmi eventually became the chairperson of the Yellow Cab association of Pakistan. She once offered to teach young women how to drive, but not many were interested. Even her daughters did not show any enthusiasm.

Zahida doesn’t belong to Pakistan’s metropolitan liberal middle class. There are a number educational and career opportunities for privileged women in Pakistan but not many for women from Zahida Kazmi’s background.

She is truly a role model for all the women out there trying to improve their financial/ economic condition. The power of underprivileged women in Pakistan has always been undermined. They are never encouraged to explore their talents or practice what they believe in. The story of Ms. Zahida Kazmi proves that a woman is capable of doing anything she sets her mind to regardless of how bad the situation might be or how discouraging the society might appear.

Government should also take necessary actions to encourage women empowerment. Schemes should be introduced to facilitate them and provide them training on self-defense and to cope up with the unsympathetic mundane realities of the society.

Also See: An Open Letter Against Rape by Sanchita Dwivedi

15 Richest Women In The World
15 Celebrities You Can Never Guess The Real Age Of!
To Top