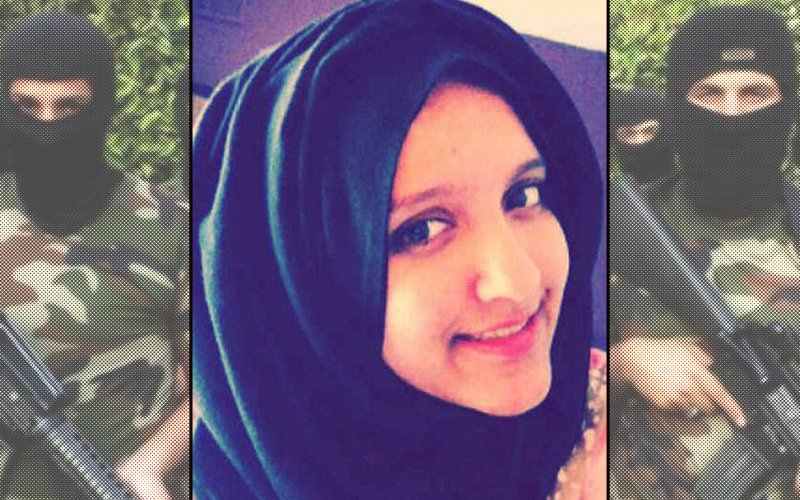 The picture gets gloomier once you visualize the agony she must have gone through. Her ache, anger, and feelings can be felt and imagined. Â Her heart must have pestered her as she would watch those murders, those scenes of severity, demise and obliteration on TV, daily papers and online networking; making her mind accept the half-truth and hidden agenda of Â west against Syrian President Bashar al-Assad.

Itâ€™s not hard to imagine how her extremist views must have first born but then created a chaos within her mind. Books and content with extremist narrative were often found in her bedroom. After reading them, she would often feel living a worthless life where everything she does or is expected to do hold no importance in reality.

This hopelessness must have brought a courage from somewhere within herself to make things right, do something which is everlasting, take steps to protect her fellow religionious brothers and sisters massacred in Syria.

The person who went through all this melancholy is Aqsa Mahmood, 20 year old British girl having a Pakistani origin. Driven by extremist thoughts that prompted her to do something meaningful, Aqsa flew to Syria leaving her parents and siblings uninformed and became a part of Islamic State of Iraq and Syria (ISIS). Â She got married with one of the jihadist of ISIS and is reported to have moved into Iraq now.

She doesn’t deserve sympathy or words of commiseration for the act she committed but itâ€™s pertinent to get into her mind to know what triggered her to do this and that too, all to join the much talked about ISIS. So, the purpose of this blog is just to comprehend her.

It hurts because Aqsa was a young soul who had the whole world in front of her where she had a chance to accomplish such a variety of different things. More aching is the fact that she had the will to do something for others and she could sense the pain of other people. But, this â€˜Willâ€™ found the wrong way. Her pure spirit found the wrong path to serve. She has been squandered now, as she chose wrong people to serve.

She wasnâ€™t the only to end up with the ISIS; we have witnessed number of other people like her with the same spirit taking the wrong path. Numbers of innocent people of young age have traveled to Syria considering it obligation to fight for freedom of their brothers and sisters and joined the ISIS as support.

We donâ€™t know the actual reasons and background of Aqsa Mahhmood. Her parents view may be biased because of their concern for themselves and their other children. Her parents claim she had not been forced to practice Islamic rituals, she had no pressure in home, and she wasnâ€™t taught something which would compel her to choose the wrong path.

She lived a normal life and was a good student in college. However, she would often remain in her room and thatâ€™s when she used to read religion in detail. This is a disturbing situation and it needs our reflection. It may be true she was attracted to studies of religion but at her age, thereâ€™s always someone who influences and at times compel a child to do something.

In most of cases itâ€™s the parents or friends. Moreover, our temperament plays only a limited role in building the perception; society and our past experiences have greater say in who we become.

Therefore, the British Society is responsible too for facilitating extremism within Aqsa Mahmood and forcing her to escape the love of her parents and join one of the most notorious Islamic groups, ISIS, after fleeing to Syria. Her parents can be questioned as well because it may be the whole nurturing process since childhood that eventually caused Aqsa to take radical steps. On broader context, governments of all developed countries should introspect into their societies as well. Most importantly, it places responsibility on all Muslims and their differed interpretation of Islam.

Islam is part of some basic integral principles which are laid down by Almighty for His Human beings of those who have capacity to ponder over and reflect. The other Islam is one narrated by fanatics and supported by certain clerical elements across Muslim world. This is the Islam which is used by Jihadist groups such as ISIS and Al â€“Qaeda to further their political and expansionist agendas. This Islam is based on the literal interpretation of holy text and glorious past encompassing the war as integral principle. It doesn’t fit into modern world.

Religions, today, need inclusively of spirit, knowledge, and science into religious texts. Muslims need to understand and learn all facets of Holy Prophet (PBUH). He practiced and promoted peace more than war, kindness more than cruelty, pragmatism in politics more than reactionary politics which is currently found the opposite of the acts the ISIS commits.

Rational approach must be adopted to understand that religions were revealed to solve problems and not to create them. By doing this, we can bring peace, progress, and prosperity among Muslims and all global citizens and protect our beloved humans against the barbarianism of the ISIS.

The other way to learn is to see our so called enemies who are ruling the world by controlling all economic resources. What they have and we donâ€™t is perseverance. They have been more hard working than us. After all, Almighty God has said, â€œThere is compassion in hard work.â€ So, now who becomes dearer to God, one who listens to Him or ones who donâ€™t?

So, Aqsa Mahmood and many other like have been victim to this philosophy. She could have lived a life much different and made a long way to make a mark for her and may be for her co-religionists as well. But Alas! She has moved along way on to the path of cruelty, massacre, chaos, and destruction thus leaving a precious life wasted. Â And, this thought has been killing me for past few days. May God show everyone the right path!

And this comparison, this imagination is so heart rending that I donâ€™t want to imagine anyone else like that again, ever.

I stand to currently condemn the acts of ISIS and for whoever the ISIS has taken under consideration as their own. With the world and their eyes set on the ISIS we must understand the tragedies those face who come under their supervision.

Ever heard of social media harassment of Pakistani girls? Here is the reality around you!
Ukraine Turmoil, National Guard linked to mass graves near Moscow
To Top