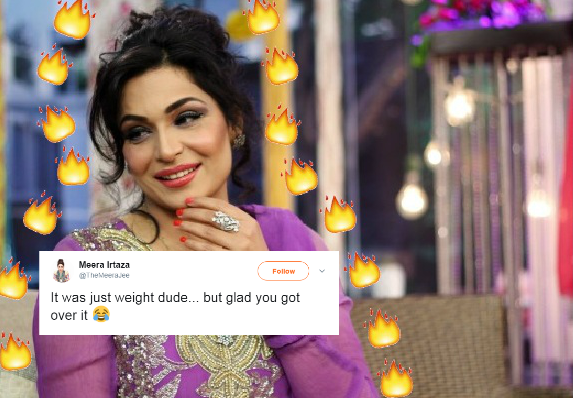 Meera Jee strikes again with her hilarious roasting tweets and we just can’t get over her Twitter account! A few incidents have taken place over a few weeks and this Lollywood actress seems to be on FIRE! Her perfect comebacks to tweets have now started to attract more followers hence, increasing her Twitter followers!

Among the list of celebrities, she has roasted Donald Tump, Mariam Nawaz, Nawaz Sharif & Rishi Kapoor. So, can you guess who made it to the list, next?

After the defeat of India over Pakistan in the ICC Champions Trophy 2017 and the internet wars between Pakistan and India, Adnan Sami asked the Pakistanis to GET OVER IT on his Twitter account. We know, we know it was hard to digest, Adnan, but you could’ve just popped a Hajmola and went with the flow…

But Adnan chose to be victimized. Bad move, Adnan…

It's just a game folks… Get over yourselves!😂

Little did this Pakistani turned Indian celebrity know, it backfired miserably! Seemed like Meera Jee was just waiting for Adnan’s tweet and here is her epic comeback:

It was just weight dude… but glad you got over it 😂 https://t.co/YF3ZwGszbc

Now if you didn’t enjoy this or what? This isn’t all… Her fans loved her comeback and here few of the tweets

Where have you been hiding your sarcasm all these years?

Should Meera consider this?

The Queen of Sass – Meera Jee!

Once a moto, always a moto! LOL!

HAHAHAHAHAHA! It just can’t get any better than this!

i called him phatta gubbara 😂😂

We’re excited to find out who’s next on Meera’s trolling list! The way she has upped her Twitter game is absolutely LIT and we’re loving it. But, is it really Meera who’s behind her Twitter account? Or has she hired someone to do so? The fur fur English, the savageness… too much to handle? HAHA!

How many of you are actually following Meera on Twitter? Which roast of hers did you LOVE the most? Let us know!

A Disabled Fan Came to Sarfaraz Ahmed’s House at 4am and What Our Captain Did Next is Amazing
“But that night, I knew something was wrong” – Dear Uncle, This Is What I Want You To Know…
To Top