Hilarious Conversations Between Speaker Ayaz Sadiq And Shireen Mazari Over 'Choo-Choo' And 'Yaar' Are Going Viral!

With the PML-N government on the verge of completing its 5 year tenure, the National Assembly sessions have gone from mud-slinging to laughs and positive murmurs, which is always a good sign in the politics of the country. 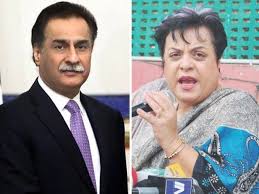 The video clip, which has been going viral, starts with the speaker asking Shireen Mazari of how many years she has been a member of the parliament. To this, the PTI front-woman says, 5 long years. The incident started with Mazari speaking out of turn, and Ayaz Sadiq reminded her she could not do so in the parliament.

At this, Mazari asked the speaker to tell the same to the PML-N lawmakers, who ‘do not do any work, just do ‘Choo-Choo’ from the back’, with a huge grin on her face. Flabbergasted, the speaker asks her ‘what is Choo-Choo?’ – and reminded her that she is inviting trouble, while loud noises of the PML-N women from behind take center stage.

At this, the speaker and Shireen Mazari, start laughing, on a lighter note. Later, still amused by the situation, the speaker of the National Assembly of Pakistan gave a formal ruling, that ladies of the parliament do not ‘Choo-Choo’ – hilarious enough? There’s more! Even though the PML-N members did not like Mazari using the word, she riterated that it is not an abuse, and the women could ‘look it up in a dictionary!’

Speaker Ayaz Sadiq was on his A-game, as he humbled the PML-N women by saying that Mazari had referred to all ladies doing ‘Choo-Choo’ and she too, herself, was one of them. At this, Mazari burst out in laughter, enjoying the situation to its maximum.

Previously, there was a similar incident in parliament, where Shireen Mazari had said ‘yaar’ to the speaker (which means friend). This again, brought immense laughter to the parliament and its members. Ayaz Sadiq kept asking her if she had called him ‘yaar’, but the PTI lawmaker laughed and said she only calls him speaker, and not ‘yaar’.

The positive vibes in the National Assembly and these conversations between Mazari and Ayaz Sadiq have subsided the long and prone tensions between PML-N and PTI. Something which is very rare.

Aisha Khan and Husband Dancing to “Despacito” at Their Mehndi Is the Coolest Thing Ever!
Here’s the Reality of Irrfan Khan’s Health and the Wild Rumors That Everyone Openly Believed
To Top