If you don’t know who Floyd Mayweather is, maybe you should google his name before reading this article. One of the richest sportsmen, highest-paid athletes of all time, Floyd Mayweather is a brand in himself. His endeavor known as TMT (The Money Team), is all about living that good life and making it big.

With an unbelievable record of 50 wins to 0 losses, Floyd Mayweather has won 27 bouts knocking out his opponent before the final round. Many hate him, others just envy him. Why? Because he is filthy rich and he loves to show it off.

Yesterday, the TMT King Floyd Mayweather made a post on his Instagram playing poker with a friend, while in his personal jet. That’s very usual for the public, nothing they haven’t seen before. 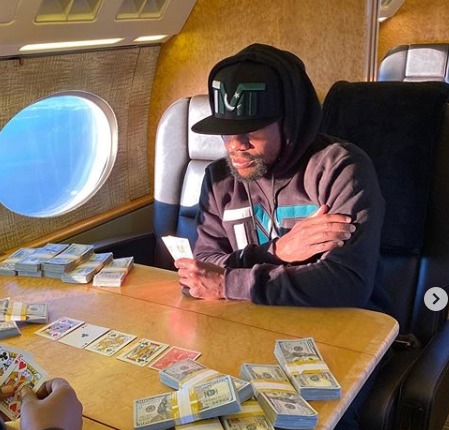 However, what was new and shocking, for Pakistanis at least, was his The Money Team headgear cap he was wearing. Floyd rocked a black cap with the TMT logo, but the flag imprinted inside was of… surprise surprise, PAKISTAN!

It is a crossover nobody expected since Floyd has nothing to do with Pakistan… never has. The only connection can be Pakistani-British boxer Amir Khan’s influence who belongs to the same league (almost).

Floyd’s ‘The Money Team’ is a brand that promotes the high-life. The boxer who has never lost a match in his life loves showing off his money and business. He would make Instagram posts with wadds of cash lying around, just as they do in the post with the Pakistani cap.

On my private jet playing a private game of poker against @tmtbside7 he thought he had me with his full house, but I smoked him with a 4 of a kind. 🎥 @thee_mayweather

Apart from his money and fame, Floyd Mayweather has beaten the best in the business, including Manny Pacquiao, Connor McGregor, and many other big names. He claims to be the greatest boxer of all time, even bigger than Sugar Ray Leonard and Muhammad Ali.

It is partially correct. Floyd Mayweather has the best fighting record in the history of boxing, where he hasn’t lost a single bout. Moreover, whenever he steps in the ring for a pay-per-view event, he ends up earning millions of dollars through endorsements, on top of the purse he wins.

This Pakistani-design TMT cap looks absolutely LIT and I for one would love to get my hands on it. Floyd’s international approach with the TMT certainly has grabbed our attention.

It’s good that more people in the West would now know how Pakistan’s flag actually looks like. As for Floyd’s journey, one thing’s for sure, as long as he lives, he will keep minting money, TMT style.