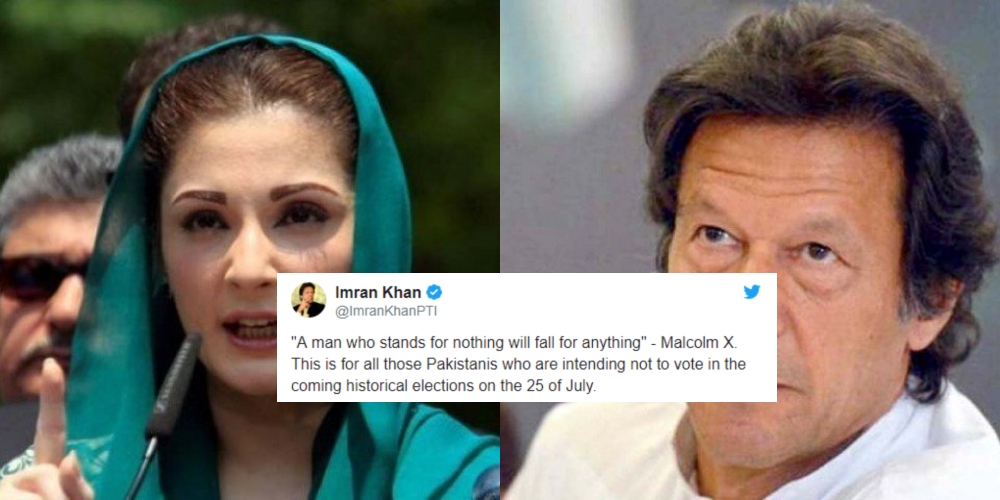 The general elections of 2018 are on the brink. A time where political parties are rolling out their campaigns and convincing voters to choose them over their rivals. It’s a pretty active scene going out there and we are literally on the edge of our seats.

Meanwhile, arch rivals in politics are on the look for throwing shade on each other. It has become a complete epidemic where politicians are going full-fledged with their rants. PML-N, PTI, PPP, all these major political parties are seriously in a race and the competition is tough. The rivalry between PML-N and PTI has taken a dramatic turn. In fact, we just saw Maryam Nawaz going against Imran Khan in what is a strong reply to one of his tweets!

So, this is what Imran Khan wrote the other day…

"A man who stands for nothing will fall for anything" – Malcolm X. This is for all those Pakistanis who are intending not to vote in the coming historical elections on the 25 of July.

You do not get to see our politicians biting each others’ nails every now and then. This is such a display that we see in the thick of all these political campaigns being in full-swing. Not every day do you see Maryam Nawaz going full rampage against Imran Khan on Twitter.

It clearly appears that she had had too much of it and she could not hold it back. Well, the thread follows their supporters going absolutely nuts with words against each other.