Are Using The Blasphemy Blame Card On Maryam Nawaz 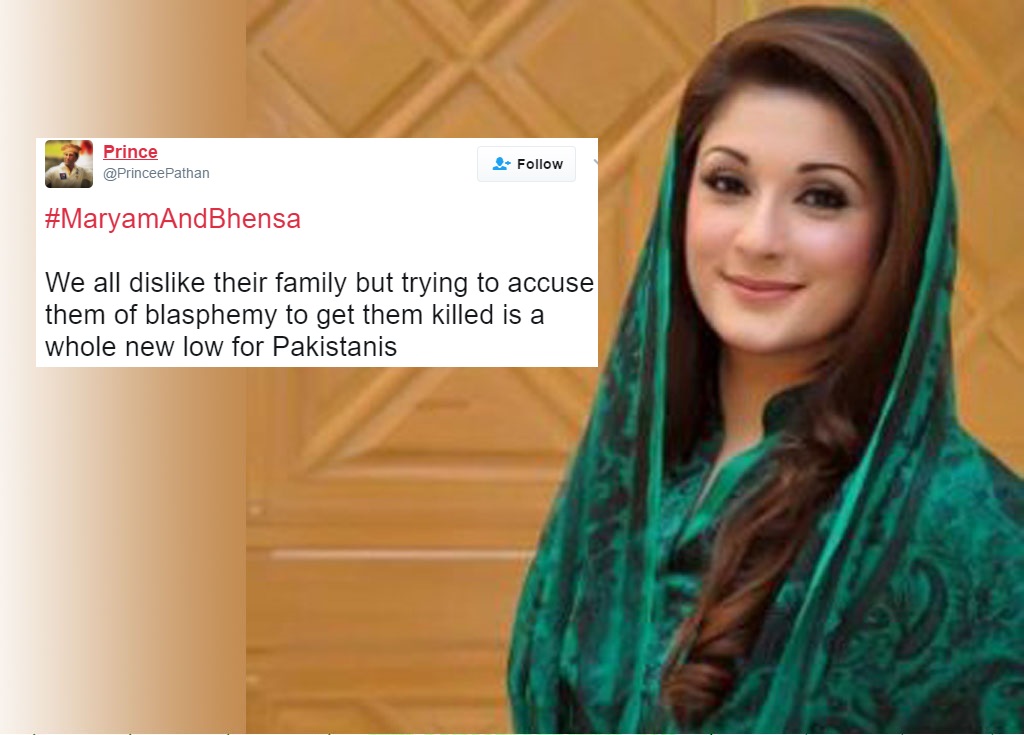 When it comes to blasphemy in Pakistan, it shouldn’t be taken as a joke. The past of this country is filled with examples where the accused has been tortured, abducted and even killed in the name of blasphemy. The recent scenario of Mashal Khan exposed how one needs to be absolutely sure of what they are blaming another person for. However, seems like many in this country still haven’t learned from the brutal incidences that occurred in the past.

Maryam Nawaz is preyed by social media users yet again. The active member of social media is seen using her Twitter space to advocate on behalf of her father, the Prime Minister of Pakistan, Nawaz Sharif.

In this past few week, there were numerous Twitter trends which trended actively to condemn Maryam Nawaz. Yesterday, the trend #MaryamAndBehnsa ignited and it revolved around accusing Maryam Nawaz of supporting the page that promotes blasphemous content.

Holy shit. The “evidence” for #MaryamAndBhensa is that she RTed the political tweets of someone accused of blasphemy.

This is how it allegedly started:

This hashtag accusing @MaryamNSharif of blasphemy based on a single, stupid screenshot has become a national trend. #MaryamAndBhensa

This Is One Way To Put Things In Perspective

Hate to see #MaryamAndBhensa trending. She is a liar, hypocrite, and a member of mafia family but maligning someone’s faith is unacceptable.

If you do not like someone, it does not mean you accuse them of something which is not tolerated.

This trend is the level the civil-military divide of Pakistan has stooped to. Accusing the PM’s daughter of blasphemy. #MaryamAndBhensa

Here’s where the matters become sensitive enough for Maryam Nawaz to be cautious on her social media:

Not random. Bloggers abducted by army were asked to link Maryam Nawaz with RAW and confess that she was behind their pages#MaryamAndBhensa https://t.co/7MuwY765QE

Attention @twitter
This is a dangerous trend that can threaten safety of an individual. Kindly remove and block accounts #MaryamAndBhensa

This certainly isn’t the proper way of framing someone you have differences with. This can lead to life-death consequences. It is horrifying to see that people talk about such a sensitive matter in such a casual way which might have terrible consequences later. One may have their differences with Maryam Nawaz, but associating someone with such a horrendous allegation is absolutely immoral.