Pakistanis Flaked Maryam Aurangzeb After She Said, “Nawaz Sharif Will Be PM Again”

Maryam Aurangzeb, the Minister of Information and Broadcasting has been pretty relevant lately. Her job was to show up before the media and talk about her party leader Nawaz Sharif in all good terms. Even when the whole wide world turned their backs on the Sharif family, Maryam Aurangzeb remained the only person having all the support in the world for them. 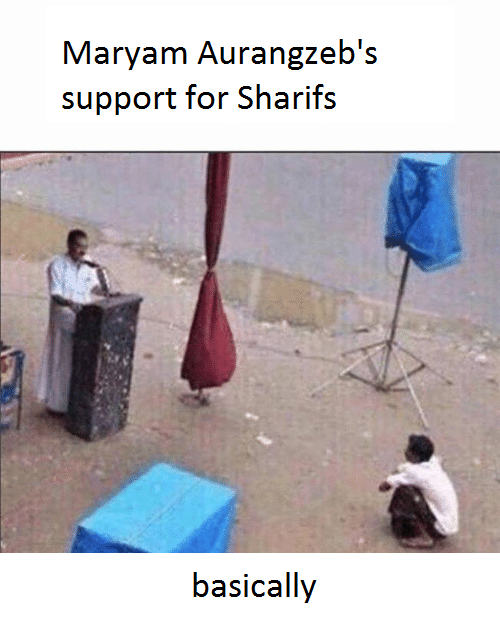 Panama leaks fiasco finally came to an end today. After months and months of updates, toil, and struggles, the verdict came out this morning. Supreme Court of Pakistan disqualifies Nawaz Sharif as Prime Minister. The decision sprung celebrations all across Pakistan as the entire nation embraced the long awaited verdict by the top court.

All judges presiding over the case ruled him out in a clean 5-0 swipe. Meanwhile Maryam Aurangzeb, who simply left no reason at all to entertain us with her ridiculous remarks. As she showed up on the media, we knew we were in for something that would make her the butt of all jokes.

LET THAT SINK IN…

If you are having a bad work day, think about Maryam Aurangzeb ?!

Maryam Aurangzeb is like that one person in the squad who keeps on defending shit after the whole squad fucks up.

I just want what Maryam Aurangzeb is high on.

Maryam Aurangzeb saying NS will be elected for the fourth time.

You've all been smoking the wrong stuff. She's on the real thing.

Look at Maryam Aurangzeb's face. So poor. So weak. So full of loss. So full of corruption.

A moment of silence for Maryam Aurangzeb at the moment. But, damn somebody must at least try to find out what on earth did she smoke before coming out and speaking out those words in media? See Pakistanis, cast your vote responsibly next time. You have an Information Minister who does not even have any idea what this verdict means and how does it go for the ex Prime Minister.

For now, it’s time to celebrate the justice delivered by our honorable court and the honorable judges.

#GoneNawazGone – Prime Minister Gets Disqualified and Here’s How Pakistanis Reacted
Jemima Goldsmith’s Continuous Support for Country is Making Pakistanis Love Her!
To Top