This Marriage Bureau In Rawalpindi Is Providing Halala Services And They Have Gone A Bit Too Far!

Islam is considered to be a complete religion and has emphasized young marriages on various occasions. This has been said so that the Muslims opt for a halal way and stay safe from haram approaches. But nowadays, extremists and fake preachers have made it hard to understand the core meaning of the religion and to act upon it.

Talking about marriages, Islam has stated different laws and principles regarding it. After the marriage, the man has the right to divorce his wife keeping Islamic values in mind while the woman has to complete her ‘iddah’ before getting married again. Iddah is a three months period which is to be completed by the woman in order to marry another man.

Making money in the name of Halala, a religious metaphor!

Many people have started making money out of people’s divorce and it is disturbing. A few years back, online services were being provided in England for Halala to the divorced Muslim women who wanted to get back with their ex-partners. From providing guys for marriage to consummation and then getting a divorce again, the services included all.

A similar type of service was seen offered in Rawalpindi, Pakistan and that too with proper marketing. It caught everyone’s attention when a picture of a visiting card was uploaded on the internet. Happening in Rawalpindi, a marriage bureau is providing Halala services as well and it is definitely illegal. There may be many more providing services like these running all over the country but no one to check on them.

This is the visiting card that went viral! 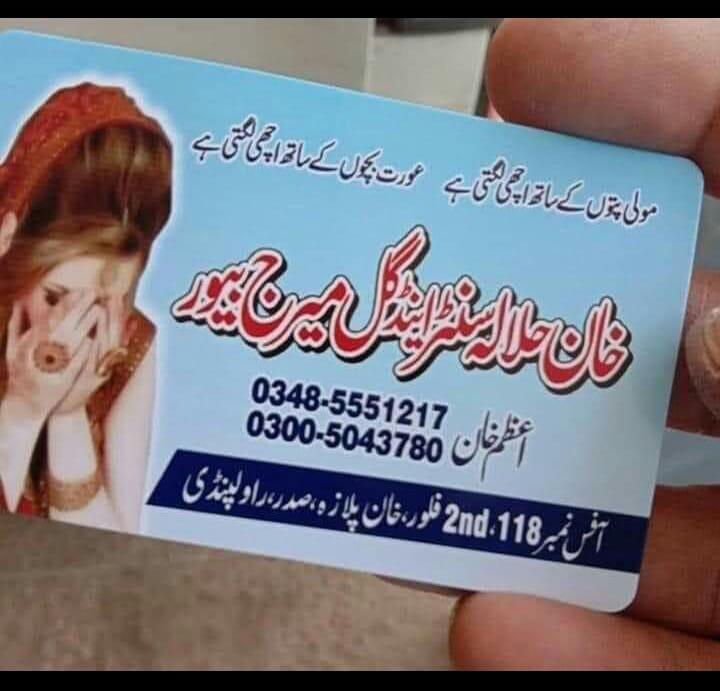 Marriage and Halala according to Islam and the proper implementation:

After the triple-talaq process, if the couple wishes to get back together, the woman is said to perform Halala first. Halala is a practice compulsory for a woman to do before remarrying her former husband. The woman has to marry another man before getting back in her former spouse’s nikkah.

Mufti Tariq Masood describing the Halala process and the conditions regarding it!

In a country made solely on Islamic principles, it is an act of shame that these type of activities are taking place. Islam is a religion of peace but a bunch of extremist minds and fake preachers have made it really hard to understand the religion for the world. Using religion for money purposes is yet another example of how low human beings can go.

Pakistan’s Precious Himalayan Salt Is Being Sold For Cheap, While India And Israel Are Making Money!
Rabia Butt Clapbacked After Being Trolled For Complaining About The Hot Weather And She’s Keepin’ It Real!
To Top