The fact can’t be denied that vlogging and blogging do provide an invaluable resource for connecting with people across the world. This is how the digital economy has changed how conventional industries operate.

Over the years, food vlogging has also flourished in Pakistan. Local and even international vloggers have explored the Pakistani food and have fallen in love with the different cuisines.

One of the international food vloggers who fell in love with Pakistani food is the famous Thailand based food and travel blogger, Mark Weins.

In 2019, Weins visited Pakistan for 16 days. Best known for his blog Migrationology, he also released the full story of his journey. He filmed his entire visit and narrated his experience with the food that he munched on. He also penned a travel guide suggesting people about what to look forward to and expect from their journey (with food stressed) to Pakistan. 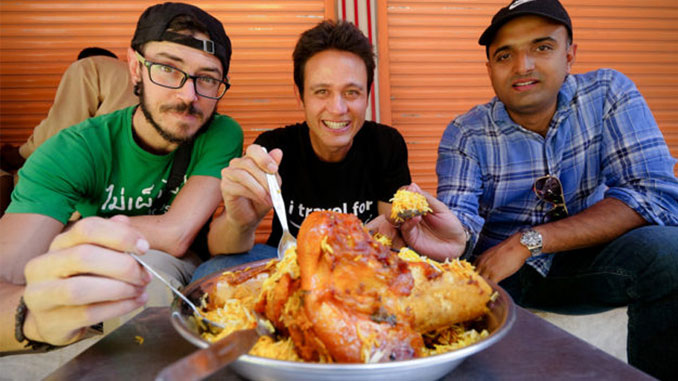 The foodstuff he relished to his heart in his trip to Lahore and other destinations can be listed virtually endlessly. To give you an idea, here are a handful of those delicacies that he gifted to his appetite:

In this latest YouTube video, Weins is heading to the street food cart at home. He looks to cook famous Pakistani food chicken karahi. Mark even showed his Peshawari sandals that he got while visiting Pakistan last year.

During the video, Weins recalled that he first ate this famous Pakistani dish during his visit to Butt Karahi in Lahore. He said that it was important to completely peel off the chicken skin when making Karahi. Weins described the ingredients and method for making the chicken Karahi. The highlight of the video was Wiens’s expression as he tasted and enjoyed every bite of the delicious and spicy food.

Travel and food vloggers are experiencing the benefits of tapping into the ready-made audiences of their vlogging. Such vloggers can help to promote tourism in Pakistan. As influencers, these vloggers are also capable of creating a strong relationship with their audience based on expertise, genuineness, and trust.

Mark Wiens is an American who now calls Thailand his home. He first started blogging in 2008 and video making around 2011. Weins says, “When I first began my website, Migrationology, it was about migrating to a place to learn about the culture, live and eat like a local.”

Fasting In Ramadan Can Prevent COVID-19, UK Based Doctor Suggests
Uncle Shoots 7-Year-Old Niece To Death For Making ‘Too Much Noise’ In Peshawar
To Top