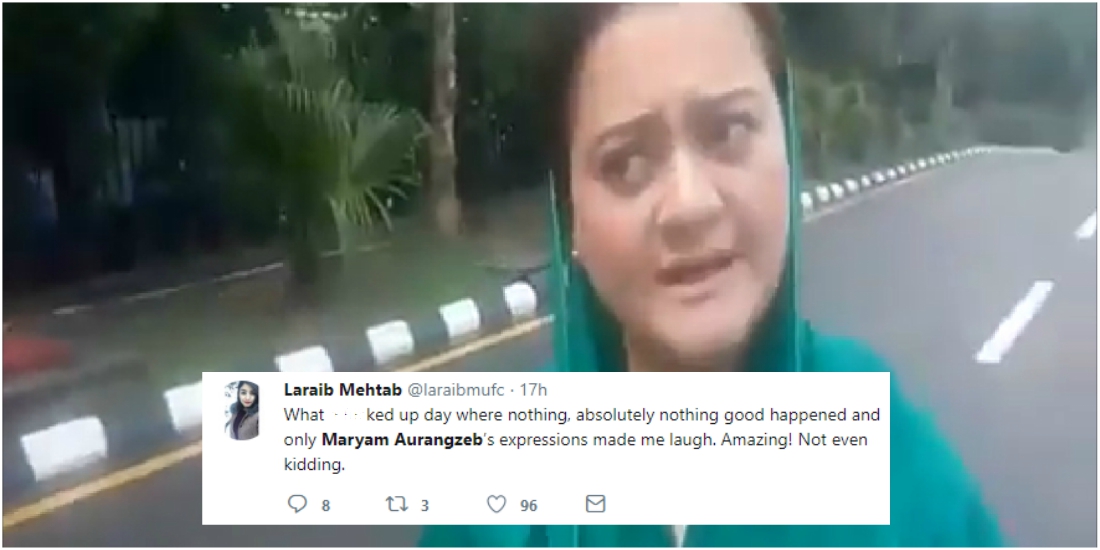 Marium Aurangzeb isn’t having a very good time. Her long-time association with PML-N is not working out (with Nawaz Sharif in jail for a whole decade lol) and she doesn’t have many supporters left after the elections.

But things got a lot worse for her the other day when Talal Chaudhry (a politician who served as Minister of State for Interior, in Abbasi cabinet from August 2017 to May 2018) was disqualified from contesting any elections for the next 5 years.

A good samaritan got a video of her reaction when she was told the news.

A shocking reaction of Maryam Aurangzeb on Talal Chaudhry's disqualification is the funniest thing you'll see on the internet.

Her reaction was priceless, as can be seen with the plethora of reactions towards it on Twitter.

She was Shocked coz she knew “Agla nmbr mera?” ?? #mujhekyunikala

I'm loving Maryam Aurangzeb's reaction ??
She was actually looking very cute and innocent though she is not..

No one’s looks should determine how innocent they are. But yes, PML-N is a very shady political party as we have seen.

Baji, none of us can stop watching it. It is amazing.

Finally got proof of Khalee Makhlooq. Can we have a retake of Maryam Aurangzeb reaction pic.twitter.com/Z6lvYgxO8N

This is so accurate that it’s scary. I’m gonna be having nightmares tonight.

The funny part is that Talal Chaudhry could have avoided the disqualification entirely. He was held in contempt of court for speaking out against the judiciary. This is evident in the two speeches he gave in Faisalabad and Jarranwala, where he verbally spoke out against the judges who had decided the verdict against Nawaz Sharif.

Was her response real? Was it fake? We don’t really know. But it did result in some great entertainment, so we are thankful to Maryam Aurangzeb for providing us with her reaction. Probably the only positive contribution that PML-N has made towards the people.