According to the reports, a Hong Kong based man strapped 94 iPhones to his body and tried to sneak into the mainland, however, he was busted by the Chinese customs officials.

The inspectors at the Futian crossing in Shenzhen (a southern Chinese metropolis bordering Hong Kong) suspected the man as he walked like someone carrying a heavy load despite appearing to travel light.

The Chinese custom officials inspected the suspicious man but found nothing in his two plastic bags, then the officials asked him to pass through the metal detector. As he passed through it, the alam went off.

The photos released by the Chinese customs authorities show a number of skillfully shrink-wrapped iPhones strapped around the crotch, chest, thighs and abdomen of the man, with duct tape.

iPhone 6 and iPhone 5 models were discovered by the Chinese custom officials. The total value of the attached devices is estimated to exceed $49000.

The previous record of the man shows a number of run-ins with customs regulations and he was held for further inquiry. 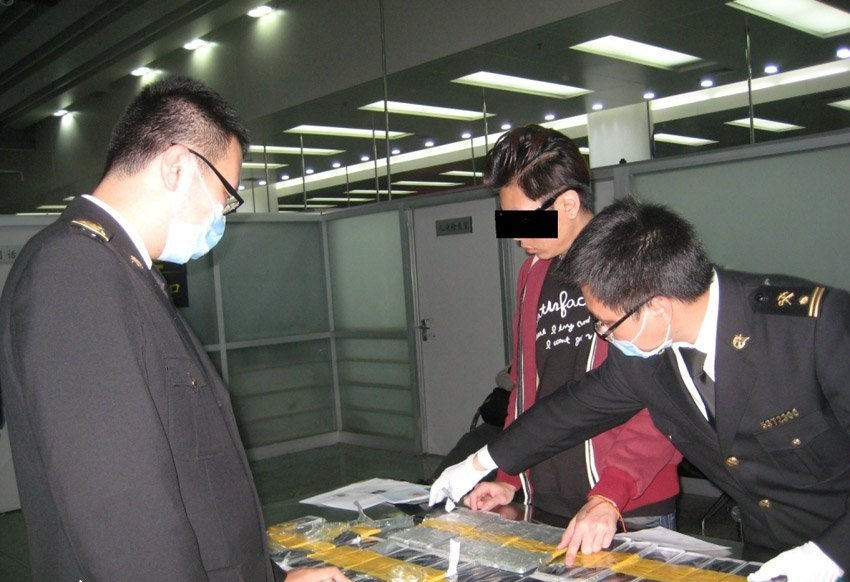 The iPhones by Apple are extremely popular in Mainland China. It took just six ours for customers of China’s three mobile networks to reserve one million units of the iPhone 6 and iPhone 6 Plus models, ahead of their official launch.

Apple iPhones are relatively more costly in the mainland as compared to Hong Kong, due to higher import tax rates.

For instance, an iPhone 6 having 64 GB of storage, costs around $1000 in the mainland, but in Hong Kong it costs around $820. This difference in the price has created a huge and lucrative black market and smugglers are taking advantage of it.

The customs officials of Shenzhen disclosed that they have taken into custody 18 mules strapping smuggled electronic products which include around 282 iPhones on their bodies since December 2014.

Pro-ISIS Messages were posted on the Hacked Twitter Account of U.S. Central Command
The Deadliest Massacre by Boko Haram; 2,000 Feared Dead in Nigeria
To Top