Share
Tweet
Share
Share
Email
A seven-year-old girl was shot dead in Peshawar’s Arbab road locality. The reason? She was making too much noise. According to the local police, little Eshaal was playing with her neighborhood friends when the incident happened and her Uncle Fazal Hayat opened fire at her. The poor soul succumbed to injuries and died on the spot.
The suspect since then has fled the area and the search for the shooter is underway. A video of this unfortunate incident is circulating social media, showcasing the brutality of the suspect.

When making noise became a crime

The girl’s father lodged an FIR against the suspect clarifying that the accused was mentally stable and there was no dispute between the two brothers. The intolerance against child abuse has been gaining momentum in our society for a while now.
What unimaginable goes in the mind of a person where he finds shooting a minor justifiable. 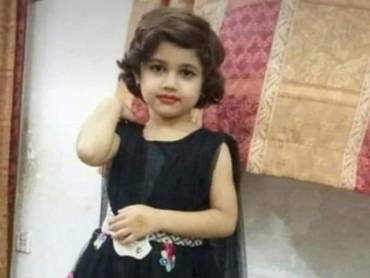 Another daughter of Eve’s life made insignificant by someone who thinks they are above and beyond everyone else. This, unfortunately, is not a standalone individual incident. Back in January, the nation was united in expressing their distress and anger after police in Khyber-Pakhtunkhwa (KPK) arrested a man. He sexually assaulted and killed eight-year-old Madiha and fled the scene.
#JusticeforMadiha trended on twitter. People expressed their grief and sorrow on the sad demise. Her body was found in a deserted area. Madiha’s killer was her first cousin who confessed to his crimes during KPK Police’s initial interrogation.

Read More: Pakistanis Demand #JusticeForHooznoor After Her Brutal Killing!
We urge children to stay away from strangers as they can cause them harm. But how do we save our precious angels from monsters living in the same home, blood relatives who we trust more than we trust ourselves? In both the incidents mentioned above, the culprits lived in the same house as the victims, were part of the family. Respected and loved by all. Still, they managed to inflict the worst of pain imaginable on their own.

Such cases intensify the need for public punishments and hangings on social media. Many argue, that how much more suffering has to be experienced before a stern example is set amongst culprits who roam around freely. The need for the hour is implementing strong consequences so the future remains untainted by the trauma of losing such precious lives.