You might have come across many incidents where you’ve thought “that is incredible thinking” but the story in context today outshines any other. Ever wondered being a Pakistani what you would do if your friend was getting electrocuted to death in front of you to save him? How would you respond to it? To save his life?

One incident from Pakistan caught on camera, has turned heads all over the world. What seems to be in Punjab, two men are seen standing outside a shop. The shopowner calmly tries to shut the main entrance of his shop, when his foot gets tangled in a wire. With his hands already touching the metal surface of the caged-door, his body gives up life and he sticks to the door. 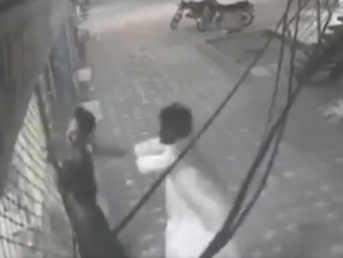 His Pakistani partner standing behind immediately realizes that his friend is getting electrocuted and he tries to save him from death. Initially, he thinks of grabbing him and pulling him away from the current. But realizes, if he does so, he too will get stuck in the flow of the current.

Man in Pakistan uses quick thinking to save his friend from electrocution pic.twitter.com/CGHmxBavql

A look here and a look there, the man instantly gets an idea and his quick-thinking saves his friend’s life. The scarf wrapped around his head becomes the lass of safety as he turns his Indiana Jones mode. This Pakistani, wrapping the scarf around his friend’s neck who is getting electrocuted to death, he pulls with the scarf with power to save him. The plan works and his friend falls to the ground, away from the current.

He then yells help and two people come for further aid. Evidently, it can be seen that the person survives but is jolted into oblivion by the current which passed through his body for a couple of seconds. Had it not been for his friend’s quick-thinking, he would not have survived.

This act of agility and a potential 1000 IQ has baffled people from all parts of the world. Since the post was shared by a foreigner on Twitter, this is how people from different countries are reacting to the video.

That’s no joke. It happened to me once. A Mexican literally tackled me on a roof, saved my life.

It’s official. All the people in my life are getting a scarf and this video so they’ll know how to save me. We could all use a friend like that.

Wow. I wouldn't say he saved his friend "from electrocution" because that dude was clearly electrocuted. But that quick thinking did save him from being electrocuted to death for sure.

With snakes in the disguise of friends a famous topic on social media, this Pakistani friend just to save his friend put his life in danger and it has shocked the world, but not letting his friend get electrocuted to death. More power to him and others who think of their friends before themselves. Smart thinking and quick actions can help turn sinister situations into stories for grandchildren.

A story sort of similar to this comes in memory when a Pakistani Air Traffic controller saved an Indian plane. That was remarkable.

Want To Be A Part Of CPEC Internship Program? Here’s How You Can Apply In 7 Steps
Know Who You Hire! Secure Yourself & Use Tasdeeq App To Register Your Domestic Workers
To Top