Harassment is becoming prevalent and an emerging evil in Pakistani society. From schools, colleges, and universities to even hospitals harassing women mentally, emotionally, and physically is becoming a devastating issue within the society. It is forcing girls to come out in the open and fight for their rights to live and breathe peacefully.

Man in a white corolla

If this isn’t cringe-worthy enough, he kept on trying to overtake the van in which this young girl was sitting. To make matters worse, he even catcalled her and insisted her to join him in his brandishing white corolla! 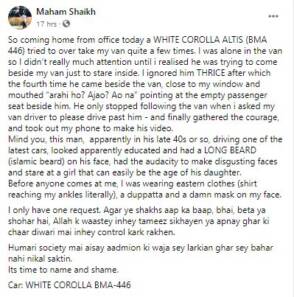 Goodness! What has our society come to? Have we lost all sense of humanity and modesty in our thirst for lust and riches?

Or, has the notion of violating women becoming a part-time hobby for men in the patriarchal society of Pakistan. Above all, this brave girl after ignoring the man’s catcalling and ridiculous attempts requested her van driver to speed up and move ahead of this man’s vehicle.

So coming home from office today a WHITE COROLLA ALTIS (BMA 446) tried to over take my van quite a few times. I was alone in the van so I didn’t really much attention until i realised he was trying to come beside my van just to stare inside. I ignored him THRICE after which the fourth time he came beside the van, close to my window and mouthed “arahi ho? Ajao? Ao na” pointing at the empty passenger seat beside him. He only stopped following the van when i asked my van driver to please drive past him – and finally gathered the courage, and took out my phone to make his video. Mind you, this man, apparently in his late 40s or so, driving one of the latest cars, looked apparently educated and had a LONG BEARD (islamic beard) on his face, had the audacity to make disgusting faces and stare at a girl that can easily be the age of his daughter. Before anyone comes at me, I was wearing eastern clothes (shirt reaching my ankles literally), a duppatta and a damn mask on my face. I only have one request. Agar ye shakhs aap ka baap, bhai, beta ya shohar hai, Allah k waastey inhey tameez sikhayen ya apnay ghar ki chaar diwari mai inhey control kark rakhen. Humari society mai aisay aadmion ki waja sey larkian ghar sey bahar nahi nikal saktin. Its time to name and shame. Car: WHITE COROLLA BMA-446

Once her van was a safe distance away, she took out her phone and made a video of this man who was doing such a terrible thing. That too, to a girl nearly half his age. Probably, who could be near to the age of his daughter.

Modesty dies a brutal death in Pakistan every day

The worst part is that many of the people in our society are blessed with a colorful mindset, and would surely think its the girl’s fault; however, to counter that, the girl informs, that she was wearing eastern wear, had a long dupatta and even a mask due to the ongoing situation of the global pandemic. Still, she wasn’t spared from the horrifying stares and catcalling.

In addition to that, this isn’t the first case of harassment that we are witnessing; no! The year 2020 has been tumultuous, to say the least; it seems girls and women are safe nowhere.

From teachers to faculty members, to colleagues. The entire society seems quite obsessed with the idea of oppressing and harassing women. Not only is this news shameful, rather it makes us cringe with disgust. Just thinking what this young girl had to go through is traumatizing enough. However, we applaud her strength and courage for straightening the man there and then. Lastly, we hope all women can join hands and support each other to eliminate this vile practice of harassment once and for all.