Dubbed as ‘man’s best friend’, dogs are known to be the most loyal characters. And when it comes to their loyalty, nobody knows it better than Atif Rizvi. Atif is the leading example of friendship between humans and dogs, and his story certainly sheds importance on how good dogs are as pets.

Currently, Atif Rizvi owns 45 beautiful pedigreed Germany Shepherds, whom he absolutely loves. But there’s a reason that Atif takes care of so many dogs, turning his whole compound into a large kennel.

Atif reiterates that there’s no living specie more loyal than a good dog. While speaking to local news source Urdupoint, Atif shared his story of how he fell in love with dogs and became such a German connoisseur. 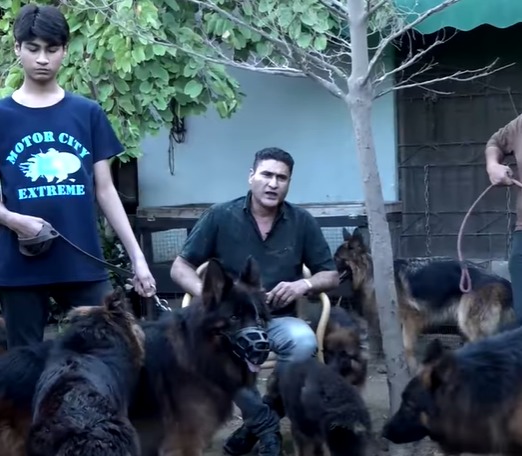 Rizvi is a member of the International Dog & Wildlife Club. With a farmhouse full of beautiful Germans, Atif refers to them as his ‘babies’. He says that every person working for him with dogs loves them just as much, to treat the dogs like children.

“What dogs have done for us humans, we can never pay them back. We feed a human all their lives and they would still cheat you. But when it comes to dogs, they have been sacrificing their lives for us.” Atif also highlighted how abuse against dogs still prevails in Pakistan

“We need to pay a tribute to these dogs because they work for our agencies, our armed forces, inland and on glaciers. They have died for us so many times,” said Atif.

Then, Atif went on to narrate his own story of how his pet dog saved his life. “When I was very young, my neighbors had a bulldog. That bulldog was set free and it attacked me. Just as it got close, my Russian poodle jumped in and distracted the bulldog, while trying to protect me. The dogs then started fighting and this gave me enough time to get inside the house,” said Atif.

He added that while he made a run for his life, his Russian poodle died fighting the bulldog. “I held his dead body in my hands, full of blood. He died trying to protect me, his owner. That is the day I decided that I would do everything in my ability for dogs, and that’s when I fell in love with them for life,” he concluded.