Ever since the inception of Pakistan, India is working tooth and nail to devastate the land of pure. Primarily, India never accepted Pakistan owing to its Nehruvian policy. Recently, India accused Pakistan of sying her territory that too with a spy pigeon.

However, the Indian forces, which are only agile in capturing birds, detained a pigeon, stating it was spying for Pakistan. Following this, a denizen of Pakistan demands the return of his pigeon, saying it was his female pigeon. 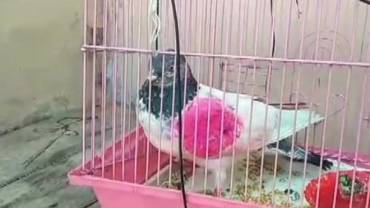 Habibullah, the 42-year-old guy is the resident of a village in Narowal; Narowal is approximately 4 KM away from the border of India and Pakistan. He gave an interview to The Independent and demanded his pigeon back. “All India has to do is add Pakistan dialing code before the so-called coded message attached with the pigeon and they can talk to me.”

He demanded an apology from the Indian government and Indian media. Habibullah told the portal, “Neither anyone from India nor from Pakistan has contacted me over this spy row. If we can return Indian pilot, India can also return my pigeon with respect.”

As per Times of India, a woman denizen of Kathua district found the pigeon.

It restated Kathua Police senior superintendent Shailendra Kumar Mishra, who said, “We don’t know from where it came. Locals captured it near our fences. We have found a ring in its foot on which some numbers are written. Further investigation is underway.”

The name of the pigeon is ‘Golden Madi’

Habibullah told the portal the name of the captured, which is Golden Madi. The pigeon has a pink sprayed on her, Habibullah told. She also has a bracelet wrapped around her foot.

He lives in Bugga Village, Narowal. He said, “On Eid day, I let about 12 pigeons, including Golden Madi, fly. All pigeons returned except Golden Madi.” He continued that later he got to know that Indian forces detained his pigeon.

“I have almost 250 pigeons and have been keeping pigeons for the last 30 years or so. I just want my Golden Madi back so that she can participate in pigeon competition due to take place on Thursday.”

While talking about the competition, Habibullah said that the competition happens twice a year; the victor is the one whose pigeon wing its way the longest. “We have been training the pigeons for the last month. I was so sure of winning this competition and prize money with Golden Madi flying.” As per Habibullah, the breed of pigeon could fly for 12 to 13 hours.

While explaining the code linked to the bird’s foot which the Indian’s are probing, he said the owners fasten contact numbers to the feet of so that people could contact if the pigeon gets astray.

“Golden Madi also has a ring attached to her foot with my contact number inscribed on it. All Indian forces have to do is add dialing code 0092 before the number and they can ascertain that she is my pet and not a spy.”

To conclude, India is obsessed with Pakistan. It is not the first time it alleged Pakistan of sending pigeons for spying. Moreover 2016, Indian authorities took Ballons into custody for espionage! Alas, the self-proclaimed largest democracy of the world is deprived of sense let alone wit and intellect.

What do you think of the story? Shall India return the pigeon to its real owner? Please let us know in the comments section below.