Man Dies After Setting Himself On Fire Outside Prime Minister House

In the most tragic news of the day, a man named Faisal burned himself alive, outside the Prime Minister’s Secretariat in Islamabad on Friday. A few minutes before the Jumma prayers, the man set fire to himself in public.

Ever since the news broke out, people had been amusing about the reason for his death. One school of thought suggested the man burned himself alive due to hunger and poverty. However, other reports suggest that the man was a child offender, and did so in fear of the police.

But the question remains if that was the case, why would he commit a cruel act like this outside the Prime Minister’s office? Was he being framed for something he did not do? Because a criminal would never think of taking his life as a sign of protest. 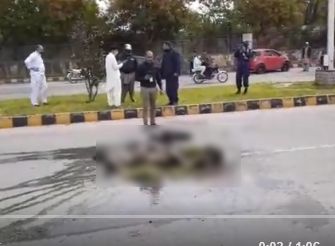 In either case, the Prime Minister’s office needs to show remorse and embarrassment over the incident. The PM House/Office remains the most guarded place in the country and if so much security could not save a man from burning himself, there is an issue.

When the man was carrying out this sinister act, even the most rogue techniques of stopping him could have been used. He could have been overpowered, manhandled or even shot in the foot. Either case would have saved his life. Already, the internet has been angry over the mass production of PTI Corona Tiger Force shirts.

This incident serves as another feather in the cap of the PM’s cabinet.

Pepsi & Lays Pledge To Provide #MillionsOfMeals To Those In Need. The Right Step At the Right Time!
Money Heist Season 4 Is Out & Fans Can’t Contain Their Excitement
To Top