At the Security Council, Maleeha Lodhi, Pakistan’s Ambassador to the UN, mentions that Pakistan will collaborate and join forces to rid terrorism. She said that Pakistan is focusing on calling out any place of origin teaming with terrorists through organized crime. Moreover, she also emphasizes that Pakistan has been a huge victim of terrorism, instead of vice versa. So, the country will obviously demonstrate efforts to halt evil.

Breaking Away Terrorism And Organized Crime:

She said that the crime-terrorist nexus varies across different contexts. Addressing how governments need to be in charge of certain “territories” she said, “It is important to re-establish government control over territories used for drug production, and promote development to provide alternative livelihoods”

It seems that the Ambassador also mentioned information regarding drug seizures. She informed that Pakistan’s law enforcement agencies have been maintaining drug seizures every year. Apparently, human trafficking, trading of narco, extortion, etc are included to be used for financing terrorist groups. 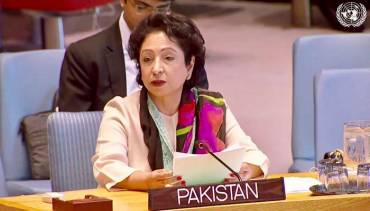 Despite demonstrating the entire nexus issue, it is important for a speedy solution to be in consideration as well. Lodhi claims about international support, saying that such communities should distribute necessary resources in order to clear the connection regarding organized crimes and financing of terrorists.

Considering the continuous drug issues, she believes it is better to analyze the supply and demand of drugs and thoroughly reduce it. “In dealing with the world drug problem, it is important to focus on reducing both the supply and the demand of narcotics drugs through a well-integrated, comprehensive and balanced approach”, she said. So, it looks like Maleeha Lodhi’s position in the UN will definitely benefit Pakistan.

It is reassuring to witness that the on-going demanding complications are finally seeing a positive light. Lodhi understands that not only Pakistan but the entire world is shaking with concern towards the handling of this “scourge”. She added, “This is a tangible manifestation of our consistent and dedicated efforts to not only protect our own country but also protect the rest of the world from this scourge”.

Talking about countless other stressful concerns, Lodhi came to address border issues as well, saying, “It is vital to build the capacities and capabilities of states facing these challenges. This is where the UN can play an effective role”

Lodhi also took to Twitter to comment on the issue once again. Her Tweet read, “Speaking this afternoon in the UN Security Council Open Debate on ‘Threats to international peace and security: Linkage between international terrorism and organized crime’: presenting Pakistan’s perspective on the issue”

Speaking this afternoon in the UN Security Council Open Debate on ‘Threats to international peace and security: Linkage between international terrorism and organized crime’: presenting Pakistan’s perspective on the issue pic.twitter.com/PWtg1IWsdz

Pakistan will not be backing away from providing a profound solution to the tricky problem considering organized crime and terrorism. Moreover, it seems the country will be demonstrating skillful contributions to ensure that the connection between these two concepts is cut. Once again, raising concern over the intensity of the problem, Lodhi concludes, “This is critical for our own people, as well as for our neighborhood and indeed the rest of the world”

What do you think of the situation? Will Pakistan be successful in its claim of tackling terrorism? Can this country finally be freed from the terrorizing elements still creeping its corners? Share your thoughts.

This Careem Driver Saved His Passenger’s Life Becoming A Hero And We Need More People Like Him!
New Evidence Proves Sridevi’s Death Was A Murder, Not An Accident!
To Top