Late Amjad Ali Sabri is a name that both makes us proud and sadden at the same time. Proud as he painted a positive and harmonious picture of Pakistan and saddened as he was taken away from us so soon.

Mahir posted the video as a tribute to the late Qawaal saying, ” This video makes me sad but it also makes me smile.”

Moreover, she wrote, “Amjad Sabri was taken away from us too soon. Here he is, a little boy, reciting Allama Iqbal’s ‘Lab pe aati hai dua’.”

This video makes me sad but it also makes me smile. Amjad Sabri was taken away from us too soon.. Here he is, a little boy, reciting Allama Iqbal’s ‘Lab pe aati hai dua’. Mukamal dua hai yeh 🤍 Thank you @purana_pakistan for the gems on your page ♥️

As Mahira shared the nostalgic video many people including celebrities commented on the lovely clip remembering the name Amjad Sabri.

Mahira’s co-star Shehryar Munawar Siddiqui also commented on the video saying how he always used to recite it in school but never understood it till much later. 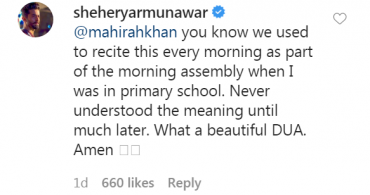 In 2016, the legendary Qawwal of Pakistan was gunned down in the Liaquatabad area of Karachi. Unknown gunmen crossed his path and shot him dead.

The Qawwal famous for his legendary tracks such as “Tajdar-e-Haram” and “Bhar-do-Jholi Meri”  left the world way too early.

The man with the magical voice was traveling from his home to a television studio in Ramadan just before iftar when armed riders pulled up alongside his car and opened fire at him. In the end, one of the most loved entertainers of our generation, Amjad Sabri, lost his life.