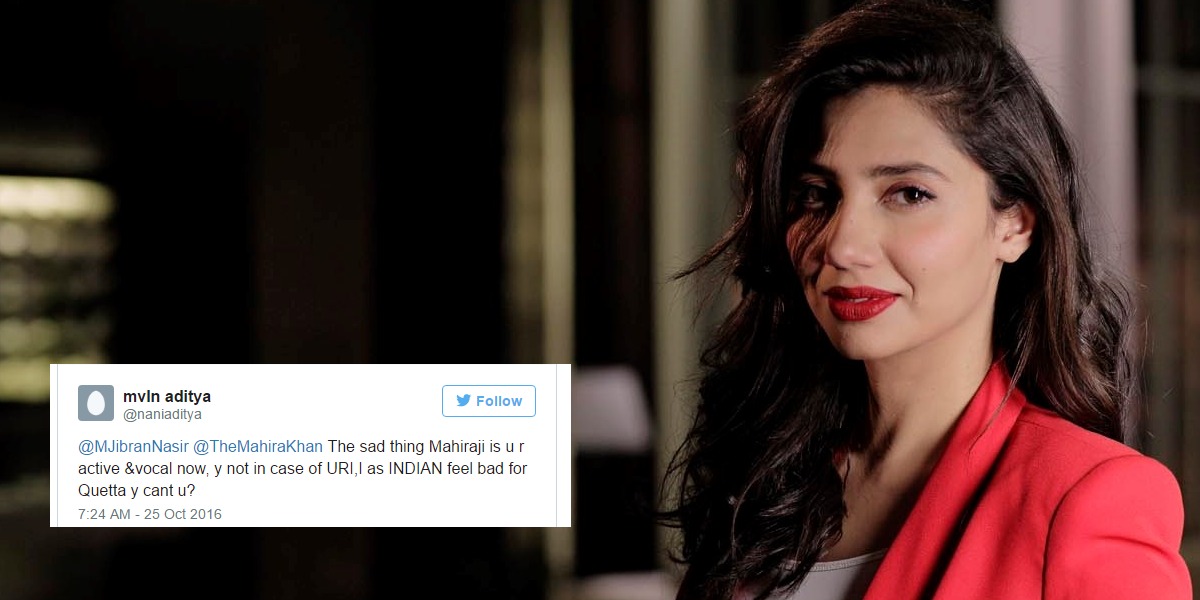 Since the attack in Uri, there has been an immense pressure on the Bollywood actors and the Pakistani actors working in Bollywood, to verbalize their discontent and prayers towards the lives lost. As if their statements of sorry and sadness are going to change everything.

There was a virtual pistol that was pointed at every one of the actors working in the Indian industry. The public was not responsible for it as much as the Indian media was. There was a collective uproar of opinions from all sides suddenly. People shouting their opinions and hatred. Crossing all boundaries to show that they are the most patriotic of them all.

Due to the recent attack on Quetta, Muhammad Jibran Nasir took his concern on Twitter and was consequently met by a troll from the other side of the border.

@MJibranNasir @TheMahiraKhan The sad thing Mahiraji is u r active &vocal now, y not in case of URI,I as INDIAN feel bad for Quetta y cant u?

Mahira Khan won all of our hearts by not keeping quiet on the matter. She shut him down by explaining to him how she and no good human being like her, should be biased when it comes to people dying.

All lives lost as losses. And people should condemn every innocent life lost!

@naniaditya @MJibranNasir This world is bleeding my friend, what are you doing trolling me? Raise your voice for something more meaningful.

This Made The Troll Take A 180 Degree Turn!

Upon realizing that a superstar had taken notice of his presence, he took a complete 180 degree turn.

Superbly done, Mahira Khan! We’re all proud of you for such a civil conduct online and offline!

The List of Top Schools In Pakistan That Can Give Your Children The Education And Grooming They Deserve!
Twitter Laid Smackdown On The Government Over “The PushUp Issue”
To Top