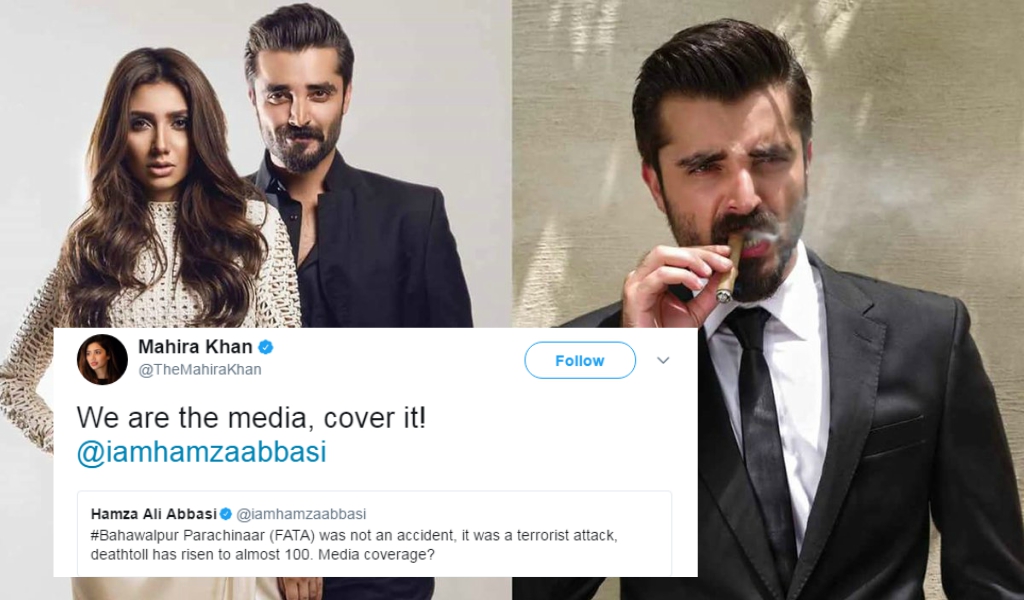 The recent incidents have left Pakistan in a tragic state. The loss of precious lives over just a couple of days was truly heartbreaking and the back to back attacks in Quetta and Parachinar was not something the civilians living there had expected just before Eid.

Pakistan celebrities now seem pretty active on Twitter and are dealing with all sorts of issues there. Not just that, but these celebrities have been trolling other celebs on Twitter, whereas, some just have each other’s back! And let’s face it, the Twitterati are enjoying it all!

Hamza Ali Abbasi is a social media activist who has been in the limelight for quite some time now and an avid supporter of Pakistan Tehreek-e-Insaaf (PTI). His remarks and opinions have always erupted heaps of criticism since the very beginning. He has been running his campaign of bringing a change in Pakistan and loves talking about peace and changing the society and the way we think.

#Bahawalpur Parachinaar (FATA) was not an accident, it was a terrorist attack, deathtoll has risen to almost 100. Media coverage?

In his tweet, Hamza stated that the incident was a terrorist attack and not just an accident. He was also concerned about the incident not getting any media coverage…

To which, Mahira Khan replied to Hamza’s tweet with…

Mahira Khan told him that they are the media, and asked Hamza to cover it; prompting him to the lead the change. We loved the tweet! Apparently, a few even criticized Mahira to not poke her head in political stuff, to not be lame and that they are the entertainment media and not news media.

How many of you agree with Hamza on this? Leave your comments below and we would love to know your opinion on this.

Become a published author today!
Instead of Enjoying the Spirit of Eid, Pakistanis Were Busy Debating If Girls Should Wear Dupattas Or Not!
To Top