It has been more than two months that educational institutes throughout the world and in Pakistan have remained shut. The novel coronavirus pandemic is seeing no stopping at the moment.

In this environment, education has become a tough ordeal to manage, not just here, but around the globe. Thus, social media has been calling out universities for lowering their fees during these times.

One social media user went on to state that the Lahore University of Management Sciences (LUMS), also called LUMSU now, is charging students Rs. 400,000 per semester. These rates, even in the times of an ongoing pandemic.

One would suggest that the university administration has to pay teachers, other staff but these numbers for one student are insane as they are. Thus, social media users are letting their voices heard. 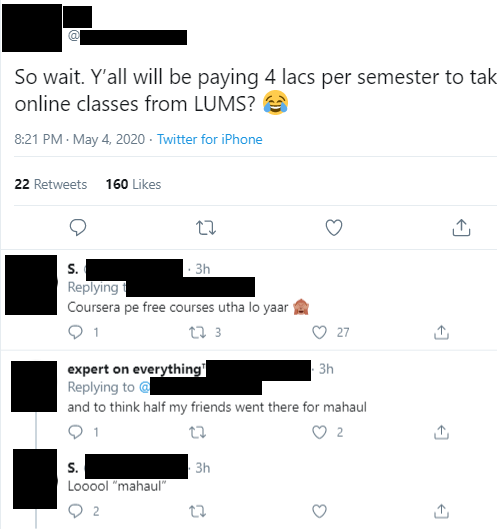 Many comments of similar nature followed in the thread after the first. People went on to say that a huge majority of students go to LUMS just for the environment, and not actually the studies.

However, LUMS remains one of Pakistan’s best universities despite all criticism. The university has also produced some big names over the years and is known for producing quality civil servants.

Although the fees may high, many in the country can easily afford it for their children’s education. Also, ever since the lockdown began, people have been talking about how academic institutions need to waive off or cut down their fees. Until they open again, at least.

But there seems to have been no encouragement to this fact. In the past two months, parents have protested numerous times in a bid to secure the patronage of the government.

Albeit, there has been no progress to that matter. This huge amount being charged by LUMS to students seems to be a little too much, as social media users suggest.

PM Imran Khan Will Conduct A Special CSS Exam To Fill 188 Vacant Posts This Year
Coronavirus VS RSS: Who Killed More Muslims in India and Kashmir?
To Top