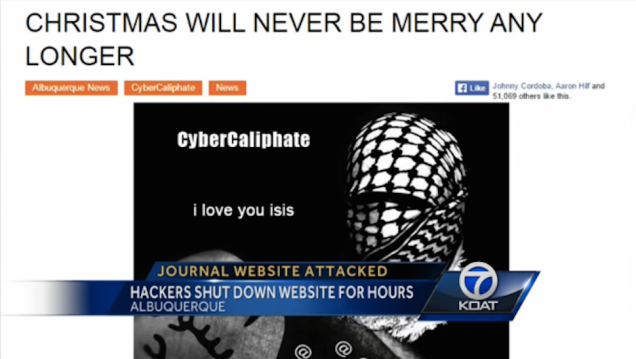 On Thursday, the ISIS propaganda threatening residents in the region got posted on Albuquerque Journal’s website. The employees are still trying to figure out how it happened.

As per the reports, early Thursday, the top online story of the paper which was a piece on a 1971 police shooting was replaced with an article “CHRISTMAS WILL NEVER BE MERRY ANY LONGER.”

The photo featured in the article was of a man with his face covered by a scarf along with the words ‘I Love ISIS and CyberCaliphate’ written on it. It was an apparent reference to the extremist group ISIS (Islamic State of Iraq and Syria). The group has been involved in terrorist activities; beheadings of Western journalists to wage airstrikes in (ISIS-controlled) Syria is among such activities. The article/post recognized a link between the sanctioned bombings (led by the U.S) of areas held by ISIS as one of the motives for the Cyber-Attack.

The post has been removed from the website. According to the reports, the author of the post warned the readers:  “We know all personal data of Albuquerque locals: Where you live, what you eat, your diseases and even your health insurance cards. You will look around more often, will call up your children more often, think of your security more often, but that won’t help you.”

The alleged hack seemed to be restricted to the ISIS article alone and the servers of the papers had not been breached, according to the director of information systems, Albuquerque Journal, Monty Midyette.

According to the reports, the paper is in contact with the Federal Bureau of Investigation (FBI).

PEGIDA, leading Anti-Islamist Campaign In Germany; Is Germany Going to Be Boiling Pot of Extremism in Coming Days?
Benazir Bhutto Saw ISIS and Other Jihadis Coming
To Top