LOL! Zaid Ali Just Trolled Reham Khan And Nobody Was Expecting This! 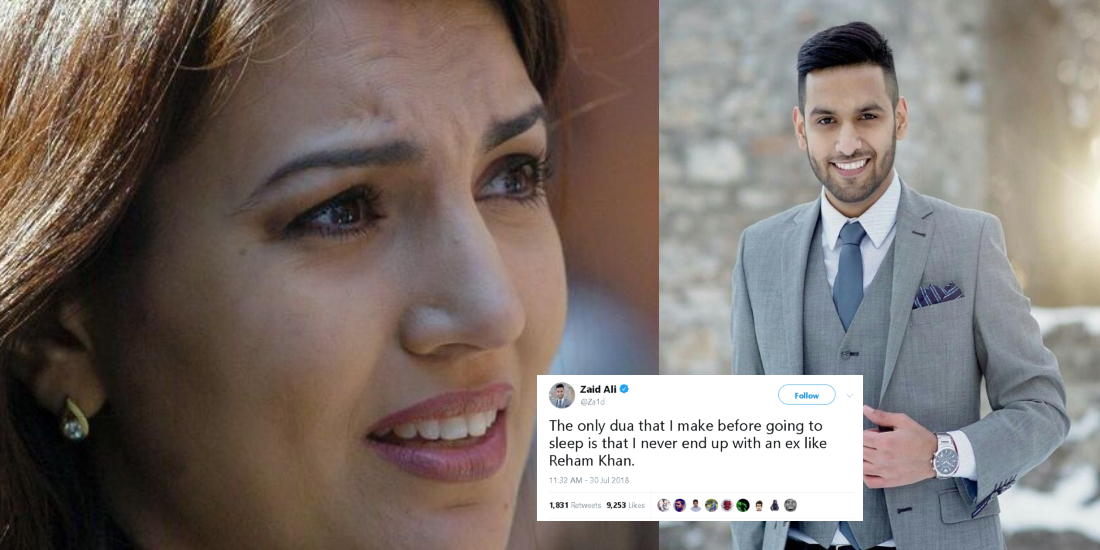 Reham Khan’s libelous book made a major uproar on the internet for the content that’s in the book. She should have given credits to Imran Khan firstly for making her book the most awaited thing of the year. Second, for giving her so much content to write about. Yes, she should have at least given him the credits since everything in the book is either about Imran Khan himself or his family or his friends. She also has written about people whom she had met during the little time of her marriage with Imran Khan.

She was married to Imran Khn for less than a year. Reham Khan was no one to any layman in Pakistan until she got married to Imran Khan but now, every kid knows who she is. Reham Khan cashed Imran’s name out pretty well and she’s still at it after the book was published prior to elections, which was totally against Imran Khan. Now that Imran has won the elections and has become the new PM, Pakistanis cannot be happier! Rehman Khan can’t stop but keeps tweeting about how she has more to reveal about Imran Khan.

I will be posting some texts soon https://t.co/EggMpyWKBk

Maybe people are “Woke” enough to be fed by the information she’s giving through her twitter. no?

I have been only doing welfare for the last 3 years. You are fed information that is incorrect. https://t.co/LTBShiOXmG

Oppss!! Did she forget to mention Putin?

Sometimes one wishes one knew less. Ignorance is bliss

For this, she was savagely trolled by many Pakistani and international comedians. Jeremy McClellan is one of them but Zaid Ali didn’t spare her too. He did not insult her in any way. He just tweeted out loud his thought.

Ameen, but your wife is an amazing girl. There's no comparison ?

You got one like Jemima just keep her happy. ❤️

Reham Khan saga is like wiki leaks for all husbands who just want a peaceful life.. Lol

The replies to Zaid’s tweet are more savage than ever. People are just too cunning! Hahaha in a good way obviously. They know how to hit the nail without hurting anyone. What do you guys say?