Locusts Take Over The Venue Of Bilawal Bhutto's Public Meeting In Thar!

Ever since Imran Khan took over the Prime Minister office, the political scenario of the opposition parties has been shaky; with their leaders in jail, they have been trying in vain to overthrow the PTI government.

Bilawal Bhutto didn’t sit still and started a nation-wide campaign against the ruling party. This protest took him to Thar for his public meeting; which is aimed to brainwash the people of interior Sindh as done by PPP since the beginning. However, before the meeting could commence, the venue is already filled with friendly visitors. – reported by ARY on Wednesday.

The organizers of the venue are troubled by these crop-eating insects that may have arrived at the place because of the heavy lighting in the surroundings. Moreover, the people that were brought from nearby villages are also facing discomfort as these insects spread wide across the entire area. Now, the managers responsible for making this address a success are facing their worst nightmare; grabbing, catching and getting rid of all the insects. 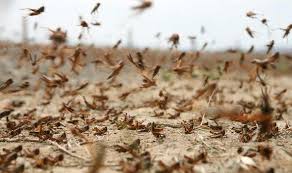 Via Daily Express/ Reference Picture Only

Bilawal Zardari is expected to arrive at Mai Bakhtawar Airport of Thar at 4:00 PM today and start the address pertaining to his protest against the government at around 5 PM. However, no progress has been made in clearing out the insects, which is definitely worrisome for PPP.

In case the meeting turns out to be an utter disaster, it will just be an addition to the already piled-up failures Bilawal has to his name. His reputation isn’t the ‘brightest’, considering his odd explanations about the monsoon rains that to date is used for memes. This country-wide protest could be the most determined step Bilawal has taken, although not for the betterment of this country. Nonetheless, seeing him actively pursuing a goal surely is a nice change for once. The locusts attack could cause a setback but what’s a leader if he cannot ignore the ‘minor’ inconveniences and continue on with his noble cause? Bilawal should take on this daring feat and set a worthy example for others. Maybe, this new pursuit will help him become a true leader, just like his father Zardari.

Do you predict that the venue will be cleared of these insects in time? Let us know in the comment section below!