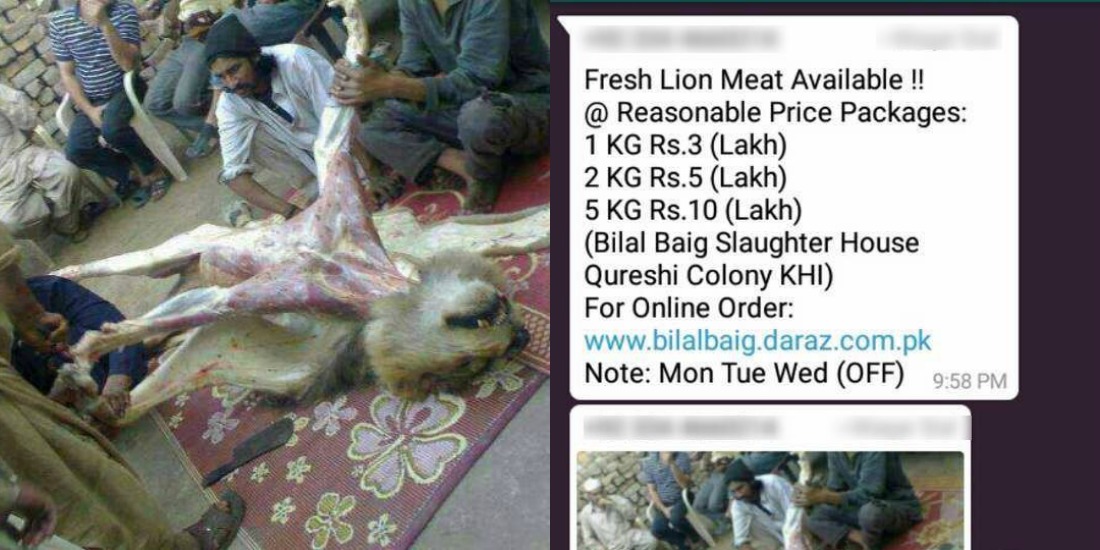 Over the last few years, Pakistan has seen a lot of crazy things being bought and sold through the medium of the internet and social media. Not just e-commerce, it is well reputed that different sorts of business operate secretly and discretely, things that are illegal and cannot be brought forward into the public.

The recent discrete business that is now going viral on Whatsapp, will leave you shocked and if true, disgusted. There’s a rumor going on in Sindh that lion meat might be available for sale. Apparently, a business is selling fresh lion meat per kilogram and people might actually be interested in it too. The story has surfaced on social media as well, where people have tried to endorse their business.

The pictures and WhatsApp messages have started to go viral on how something like this could be going on in Pakistan. As per the rate list, one kilogram of fresh lion meat would cost you Rs. 300,000 – two kilograms for Rs  500,000 and on a special discount, five kilograms for Rs 1 million. The person has provided his address along with a website link for online order, further stating that Mondays, Tuesdays, and Wednesdays are not working days for the company.

Now here’s the deal, the website link that the person has provided is bogus. Check for yourselves: www.bilalbaig.dawaza.pk.com — so, we’re going on to believe that this might have been one of the cases and somebody is trying to fool people with this picture. There even might be a possibility that the said person has created a hoax and sells meat from other animals to cover up the lion charade. The picture, we believe, might be of a dead lion being prepared as a hunting trophy. 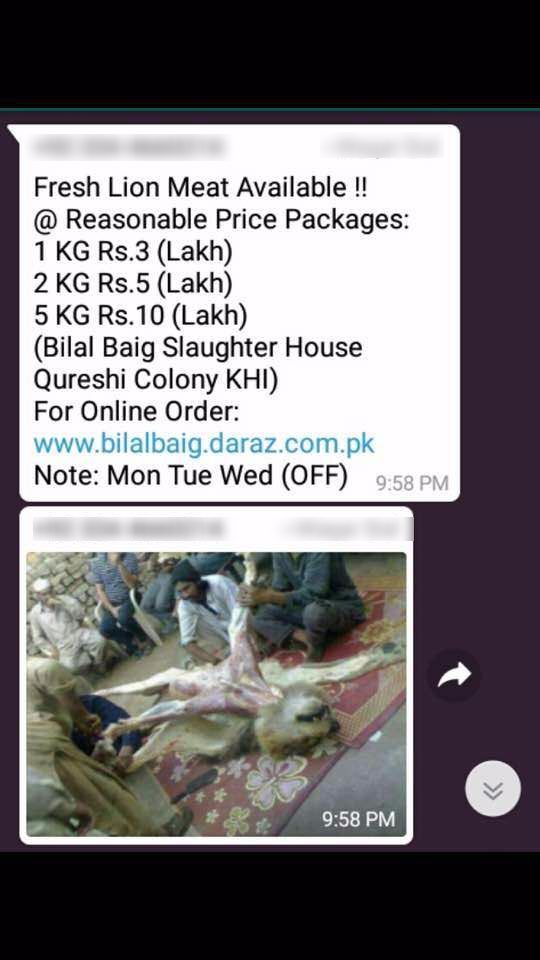 However, this is not the first time something like this has come up in Pakistan. Previously, there have been arrests made by the concerned authorities on different cases ranging from reptiles to other animals. The news might be a hoax or it might be true, one can not put a finger on it completely. If the news is true then the capitalist cadre of Pakistan has hit a new low, if it isn’t, then somebody is very good at staging rumors.

Concerned authorities still need to look into the matter and keep a check on such incidents. While there are people who can hardly afford chicken meat, there are people that prefer eating lion meat in this country as well.

I Was Happier As A Single Mom As Compared To Being Someone’s Unhappy Wife – The Taboo of Divorce!
My Immense Love for Plants
To Top