Woman Calls Out 'Intellectuals' Harassing Her On 'Professional' Network LinkedIn

In today’s day and age, women have become more empowered than ever before. Apart from equal pay and basic rights, women are also championing the demand for respect and distance.

Social media has acted as a keynote of harassment and an unsolicited approach for women. Some social networks are famous for letting people showcase their emotions easily, while others are known to be rather professional in nature. However, it seems, there is no difference between either today.

A woman called out different men for approaching her on the world’s most preferred ‘professional’ social networking website Linkedin. She was of the opinion, that even the most educated people on the network approach women without their regard and converse in casual conversations.

LinkedIn – not so professional anymore 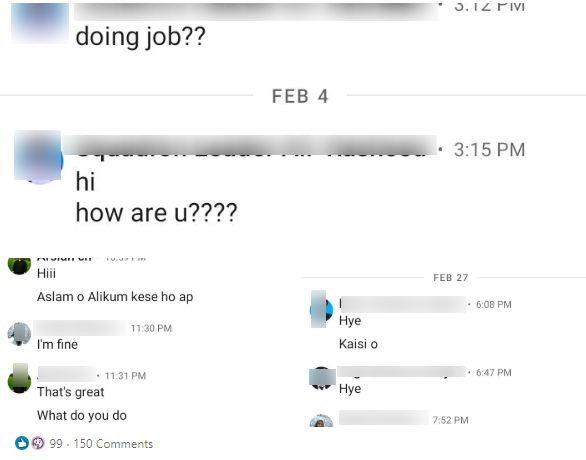 This is what she had to say: “Why people are using a business networking app as an unofficial dating app. How many times females would have to remind you that LinkedIn is not a dating website? I am sure that each and every female of my network has received inappropriate and unwanted messages on this so-called “professional app”. I am not hiding the names of these people because I want you to know that even the most educated people of our society are playing a vital role in using LinkedIn to harass women. #LinkedInHarassment.”

However, after her post, some people stated that there was nothing wrong with a casual conversation, even on a network such as LinkedIn. People from different walks on life gather on the social network to help and promote each other’s work. LinkedIn is also a renowned job-hunting website, where employers and employees meet and see each other’s profiles.

Some would oppose the calling out, while others favor it. In 2020, anything without consent is considered a criminal offense, at least in the courts of social media. Recently, girls from a renowned school of Pakistan called out their teachers for alleged harassment.