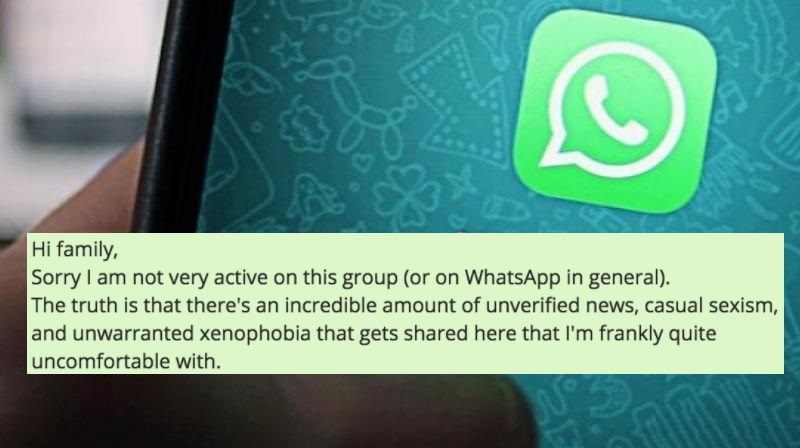 Millennials of 2017 – the biggest difference we see between us and the previous generations is the mindset which has predominantly evolved. In the aspect of social justice, this generation is becoming more particular about the rights they possess. From feminism to various other pillars of the social construct of our society, the youth is becoming aware.

One of the elements which determine how we are evolving resonates by the way we react towards old-school thoughts. Each person, be it brown or white, has a family group on WhatsApp or gets invited to social gatherings off and on. The discussions happening in a family gathering or a group depicts the generation and the mindset gap.

Fundamentally, we are told by our elders to ‘accept’ this gap and try to ‘deal with it’ because of the status the family members have. We can not argue with them to even make them understand how they depict sexism in their statements and/or thinking.

At one point or another, we try to leave the family gathering or a WhatsApp group because your Chachu may have mentioned how women, in this advance 21st century belong behind a cooking stove only.

The only space more casually sexist than twitter are family whatsapp groups.

Most of the times, these things are not okay even to ignore, primarily because the generation today understands how evolved they are.

Having that said, this Woman Addressed the Matter in her Family WhatsApp Group with Such Bravery

In today's personal victory, I quit my extended-family WhatsApp group. I cannot fully express the relief I feel. pic.twitter.com/E02iXtbLvh

This goes out to show how this generation is not okay with regular sexism and discrimination that elders practice in the name of humor and Namaah clearly stated why.

If you think any part of this article is incorrect, discuss the entire episode of Qandeel Baloch with an elderly person of your family and you’ll understand the true essence of this girl’s message.

While there might be a difference of opinion but that doesn’t mean we end ties with our relatives. There needs to be a boundary that pleases your thinking as well.