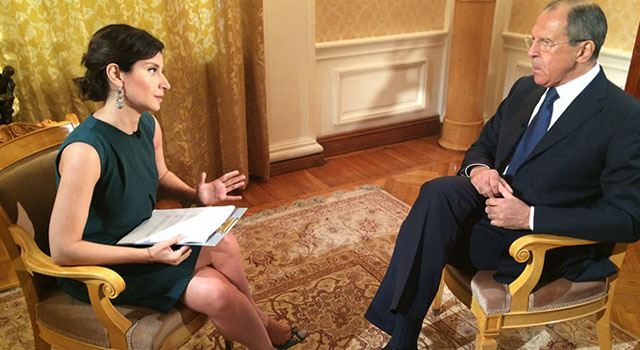 The coup-appointed Kiev governmentâ€™s order to use force against Ukrainian citizens is â€œcriminal,â€ the Russian Foreign Minister told RT. He also denied claims that there is Russian military presence on Ukrainian territory.

Referencing the four-sided talks between the EU, the US, Russia and Ukraine that took place in Geneva on April 17, Lavrov accused Kievâ€™s coup-appointed government of going back on its pledge to put a stop to all violence.

â€œIn Geneva we agreed there must be an end of all violence. Next afternoon [interim Ukrainian President Aleksandr] Turchinov declared almost a state of emergency and ordered the army to shoot at the people.â€

Turchinov announced the resumption of the anti-terrorist operation in eastern Ukraine on Tuesday. Moscow has decried the operation and urged the Ukrainian government to refrain from using force on civilians living in the region.

The Russian Foreign Minister said the buildup of troops on the border with Ukraine was within the bounds of international law and denied the presence of Russian troops in East Ukraine. Lavrov said the troops were participating in routine military drills, something that has been verified by international inspectors.

Describing a worst case scenario in the Ukrainian crisis, Lavrov said Russia would be forced to respond if it were attacked.

â€œIf we are attacked, we would certainly respond. If our interests, our legitimate interests, the interests of Russians have been attacked directly, like they were in South Ossetia for example, I do not see any other way but to respond in accordance with international law,â€ he said.

â€œRussian citizens being attacked is an attack against the Russian Federation,â€ he told RT.

Referencing Prime Minister Arseniy Yatsenyukâ€™s trip to the Vatican on Wednesday, Lavrov said the acting Prime Minister would do better to visit the South of Ukraine and actually meet with the anti-Maidan protesters.

The foreign minister also spoke about American involvement in the ongoing crisis in Ukraine, accusing Washington of trying to manipulate the situation.

â€œThere is no reason not to believe that the Americans are running the show,â€ said Lavrov, referencing US Vice-President Joe Bidenâ€™s visit to Kiev and its coincidence with the renewed counter-terror operation on activists in eastern Ukraine.

The situation in Ukraine is just another example of Washington trying to gain ground in the geopolitical fight, the minister said.

â€œUkraine is just one manifestation of the American unwillingness to yield in the geopolitical fight. Americans are not ready to admit that they cannot run the show in each and every part of the globe from Washington alone,â€ said Lavrov, adding Washingtonâ€™s â€œready-made solutionsâ€ cannot remedy a crisis that it does not understand.

The Russian government does not recognize Kievâ€™s interim government, which took power on February 22 following weeks of deadly protests ending with the ouster of President Victor Yanukovich.

Watch Sergey Lavrov’s interview in full on RT at 16:30 GMT.