The police force of this country has plunged itself deep into corruption and not only that, they have lost all conscience which this dignified profession demands. Punjab police, in particular, has faced severe criticism over the recent questionable activities carried out by them.

From the unforgivable murder of the mentally disabled Salahuddin under police custody that has enraged Pakistanis to the point that they have started a country-wide campaign to bring the culprits to justice to them being involved in a child pornography racket; they are not only the enablers of crime but are equal participators.

Disturbing footage of a police officer in Lahore aggressively shouting at an old woman has appeared. 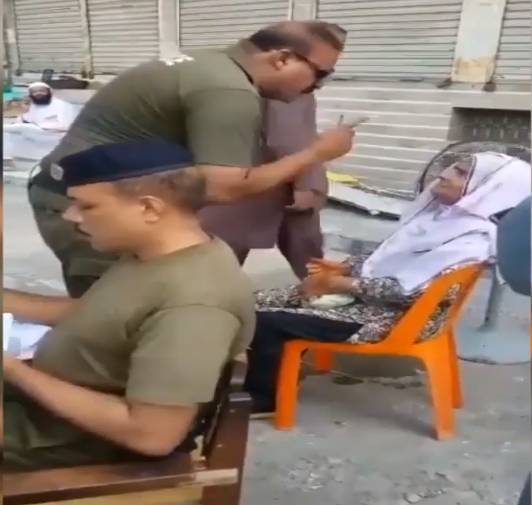 This insensitive and disrespectful officer didn’t even spare a moment to consider the fact that he is speaking to an elderly woman and continues to argue with her in a violent tone. When the old lady clearly appalled and offended tells him to shut up, he had the audacity to snap back at her, shouting ‘tu band kar’. Furthermore, he then takes her walking stick idly standing next to her and throws it away.

A uniform clearly doesn’t have the power to change a man’s nature.

The old woman just stares at him as he continues to insult and degrade her. At this point, it isn’t even about the professionalism with which police officer is expected to behave but is more about this individual’s poor upbringing where he clearly wasn’t taught how to treat his elders.

This incident, according to the sources has occurred outside the CPO office in Lahore. Has his uniform bloated his ego to the point that he forgot how to treat others especially a woman of his mother’s age with dignity and respect? Whatever the case may be, the poor fragile woman’s self-respect was gravely hurt and the video is hard for anyone to watch without feeling a rush of anger.

These black sheep among the hard-working, honest and dedicated officials of Pakistan have destroyed the integrity of this profession. They should be sorted out and fired.

What are your thoughts on this news? Let us know in the comment section below!

Pakistan Is Set To Buy 36 Mirage V Jets From Egypt And This Is Giving A Clear Message To India!
These Two Girls Exposed A ‘Sexist’ Online Group Made By Students Of LUMS And This Is Sick!
To Top