In a shocking revelation, students of the prestigious Lahore Grammar School have come out with strong harassment allegations against their four male teachers. According to details, Students specifically of O and A-level students have made allegations against their four male teachers for harassing and ‘making double meaning jokes’ in their co-ed classrooms.

A former LGS graduate has come out with proof against one of the teachers. The girl who chose to stay anonymous posted the vulgar messages she received, on an Instagram account. 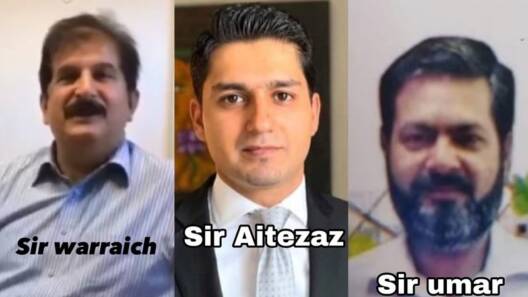 The girl posted indecent pics and screenshots of the text messages sent by Aitzaz.

I didn’t expect this post to receive so much response and am so proud of the girls of LGS 1A1 for sparking a revolution….

was contacted by an ex-student of a predator, who asked me to share her testimony here so that he can be exposed as such. Aitzaz Rehman Sheikh is a SERIAL HARASSER at LGS. admin at the school must take a stand against him. he has gotten away with this for too many years #TimesUp pic.twitter.com/JFtPOX5Udu

A friend of mine posted this about her school LGS 1-A 1. This is so disturbing. How can a school still have these guys roaming around their premises after all these allegations. Disgusting. More power to the girls who brought this up and saved many girls from becoming a victim. pic.twitter.com/YrEARSofkA

The other 2 teachers Warraich & Omar were also accused of sexual harassment.

Similarly, when a girl complained about ‘Sir Omar’ to the management, they responded by saying it’s your fault for wearing revealing clothes.

Moreover, many also stated that complaints were made to the management but no action was taken. Only when the pictures and posts of the physical harassment went viral on social media, that only made them see sense.

Student upon student studying in LGS school branches (1A1, JT) are coming forth with their experiences of sexual harassment and having to sit through inappropriate behaviour by male faculty, specifically for O/A levels. THESE ARE MINORS.

Another twitter user came out saying when someone complained years ago the admin dismissed them saying who ‘apke baap ki tarah hai’.

So brave of these students to come forward! Warraich, one of the accused also taught me 9 years ago. My friends and I were just discussing how none of us had the guts to say anything. When some did complain, the admin said ‘woh aap keh baap ki tarah hai’.

After the social media outcry, the management of LGS forced to take action against the abusers terminated all 4 teachers immediately.

LGS 1A1's administration is still trash though. I hope they don't think this absolves them. pic.twitter.com/rZg2oDpFXd

The question now remains, is terminating someone the solution? Why isn’t the state taking action against these alleged culprits who still roam free when hundreds were traumatized due to their obscene acts?

So no accountability for the LGS 1A1 admin who had been brushing this under the rug for years?

Getting rid of him was the bare minimum and the easiest things to do. Going after these LGS aunties should be the real priority.

1A1 has terminated all of these teachers. pic.twitter.com/DRyn3lHokr

We applaud the brave young women who came out and spoke against such appalling behavior. The question now arises, where are our kids safe? Parents blindly trust the teachers in the school to look after their children’s well being. But who to turn to now when the teachers themselves are turning out to be the biggest predators!

Also Read: Effective Ways To Identify If Your Child Is Experiencing Abuse

What do you think about the story? Let us know in the comment section below.

Here’s Why People From This Generation Are So Lonely!
This Is How India Is Supporting BLA In Pakistan To Sabotage Peace In The Country
To Top