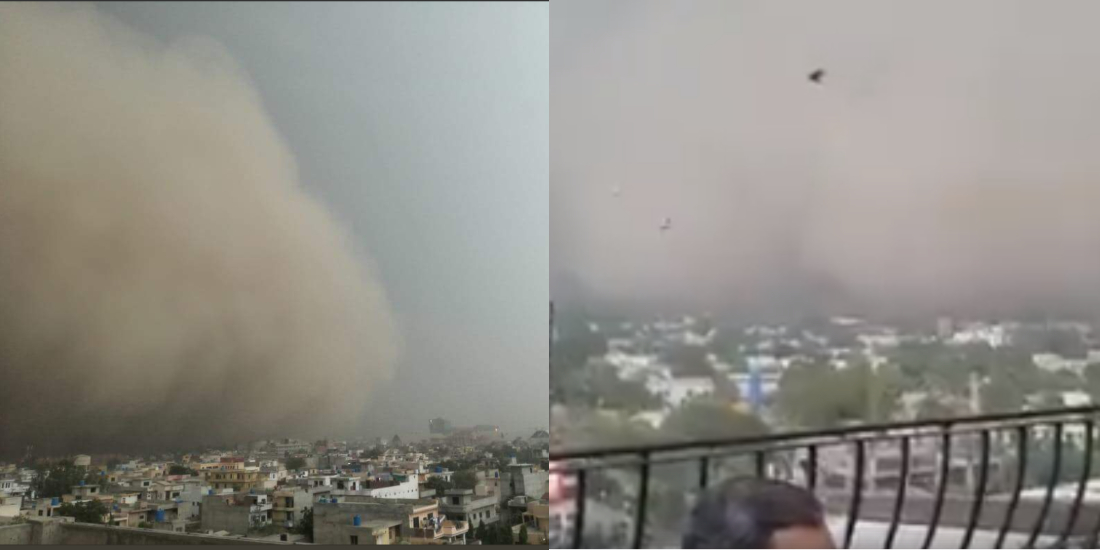 From the last two years, different cities in Pakistan have been facing climatic changes that have affected our lives in a dangerous manner. Lahore, being the first one to face the oddest of situations when it witnessed smog in the region. Islamabad too faced a lot of earthquakes in the meantime where the frequency of the earthquake was very severe but things were unharmed! Lahore, including Delhi, was affected by bad smog from 2016 and people were unable to identify the effects and causes of it.

The dense fog covered the city like a veil! Flights were canceled and schools were closed due to less visibility on the roads!  Yesterday, Lahore yet again, faced a very bad sand storm which created enough chaos and people and life, in general, were disturbed. People on the internet shared some breathtaking photos as the storm was actually very scary!

This photo of the storm arriving shows the might with which it is coming!

I've never seen a storm like this in Lahore ever. Climate change is real! Believe it or not it will get worse and worse if we don't act now! #ClimateChangeIsReal #Lahoresandstorm pic.twitter.com/kTpE7Gve7Z

And this guy shot the video while people were calmly preparing for iftar!

4 Dead, 13 Wounded in Lahore due to Dust Storm https://t.co/WaHxlic9P8 pic.twitter.com/2Zd95qJKqb

Someone also made a timelapse of the storm coming. It literally took a few minutes for the blackout…

Fear Him, Who can turn the day into night within minutes and send a fierce dust storm.
ALLAH AKBAR#Lahore_Last_Night#Ramadan pic.twitter.com/kNsn5dDThG

Fear Him, Who can turn the day into night within minutes and send a fierce dust storm. ALLAH HU AKBAR

Climatic changes are the results of global warming which is caused by the pollution that is combined to make the chaos and destruction! The industries and tons of dumping from them into the sea and air pollution by thousands of vehicles is the crucial cause of all the temperature rise and uninformed climatic changes! May we all stay safe and be more cautious in saving the environment.