Pakistan is full of talented folks. Although there is a lack of fundamental necessities, some people in the country are pursuing their goals despite the odds. One such person is Sahibzada Muhammad Jawad in Peshawar. He is the first Khyber-Pakhtunkhwa Ph.D. scholar to do research on scorpions.

Yes, scorpions. According to Jawad, no one in K-P has worked on the subject before him and there is no laboratory for research on scorpions in the province. He told The Independent Urdu that he had been searching for scorpions in different parts of the province for some time now, as a result of which he has three families of scorpions with him. 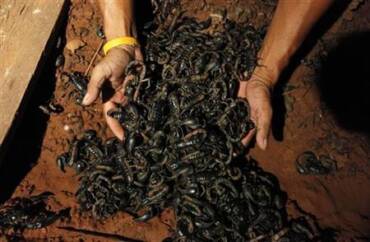 ‘There are 20 families of scorpions in the world’

“There are 20 families of scorpions in the world with 2,500 members; I am searching for them. Who knows while my probe I may find species of scorpions that are rare in Pakistan and the world.”

He also requested the government to assist in the research as scorpion venom is being worked on all over the world and has proved to be very useful in many diseases.

Jawad said scorpions were found in large numbers in K-P. If the government takes this issue seriously, by setting up a laboratory, the province can become a major exporter of scorpion venom to the world.

According to him, he does not get any help for his research work. He has been collecting scorpions in remote areas at his own expense. As a result, he has collected about 700 unique scorpions. Jawad keeps them in the refrigerator at home due to a lack of laboratory facilities.

Earlier, many in the country started hunting scorpions to sell them at a heavy price. However, that business didn’t go well. What Jawad is doing is quite opposite of making windfalls as he is doing it for research purposes.

Man Gets Software Updated After Derogatory Remarks Against People Who Support Karachi’s Separation
You Won’t Believe Why This Food Delivery Boy Didn’t Give This Karachi Girl Her Order!
To Top