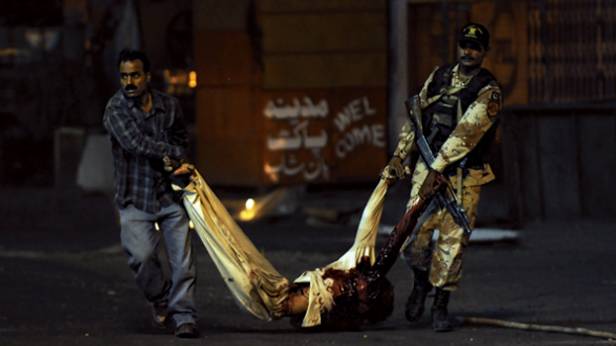 Karachi is among the few mega cities in the world where children as young as seven can tell you the difference between a gunshot and a firecracker – with accuracy. So desensitized have the denizens of Karachi become to murder and mayhem that men fleeing on a motorbike after pumping bullets into someone hardly raises any hackles. News tickers on TV channels and SMS updates on the cityâ€™s law and order is the staple that now no longer gives the people any nightmares.

Laden with excessive workload, crime reporters prefer to operate as â€˜syndicatesâ€™ while gathering news â€“ dividing various areas of the bulging-at-the-seams metropolis among themselves, as they dig out the details of the daily killings. They share the number of each dayâ€™s body count like people share the score of an ongoing cricket match.

Only this is about blood and gore.

Making sense of the senseless: Target killing
According to independent estimates, a staggering 2,350 people lost their lives in Karachi violence from January 2013 to February of this year. Around 80 percent of them were the victims of what experts label as target killing. It is one of the several categories that they use to make sense of the senseless violence that plagues the largest city of Pakistan, which generates 70 per cent of the countryâ€™s revenue.

â€œWe define target killing as a gun attack aimed at one or more individuals.â€ said Mohammed Nafees, a Karachi-based analyst associated with the Centre for Research and Security Studies, Islamabad. â€œWe also count the dead bodies that are found across the city as â€˜target killingâ€™ because in such instances the victim is often kidnapped, tortured and finally shot. Target killings differ from the use of IEDs or other explosive materials, as that falls under the domain of terrorism-related incidents,â€ explains Nafees.

A melting pot of diverse ethnic, sectarian and socio-political identities, Karachi is often termed as â€˜mini-Pakistanâ€™.

A city with a population of 22 million and growing by the day, and the melting pot makes up of every violent strain in the country: sectarian groups, militant wings of ethno-political and religious parties, drug mafias and land grabbers.

But law enforcement officials say that the main factor behind Karachiâ€™s violence, be it sectarian or ethnic in nature, lies in the patronage lent to criminals and targeted killers by the major political parties in the city. â€œPeople make brouhaha about the Talibanâ€™s presence in Karachi, but I think the threat is a bit exaggerated,â€ said a top police official on condition of anonymity, for he is not authorised to speak to the media. â€œTaliban can never rule over us. They can only inflict short term damages with attacks here and there. Itâ€™s the political parties that rule over Karachi and their pet target killers who are responsible for the law and order crises in the city,â€ he added.

In the past few months, officials say, members of secular political parties have been carrying out tit-for-tat killings of those associated with religious parties. â€œThe trend of targeted killings in Karachi is very complex, as workers of political groups that proclaim to be secular have been found active in killing members of religious parties. Itâ€™s a turf war that is driven by narrowly-defined agendas that propel these groups to kill each other.â€

The official further said that there is hardly any ideological zeal attached to these target killings. â€œItâ€™s all point-scoring and to some extent, maybe, strategic in nature – crimes these political parties commit to keep their strongholds in their hands.â€

However, the police officially admitted on several forums â€“ including the Supreme Court of Pakistan â€“ that the militant wings of political parties are hugely responsible for the ongoing chaos in Karachi.

â€œIt would be wrong to suggest that there is no political backing behind these criminals, but I can tell you that the Karachi police is independent of any political influence and we are going after anybody who is a criminal, irrespective of their political affiliations,â€ said the spokesperson for Karachi police Shakih Atiq.

Rise in sectarian target killings
Independent estimates suggest that in the last six months, ever since the federal government-backed targeted operation against â€œcriminal elementsâ€ was launched in Karachi, there was an immediate decline in the incidents of target killings, as the months of November, December and the first two weeks of January were relatively calm.

However, in the past two months, the rate of targeted killings has increased in the city. The Mutahida Qaumi Movement (MQM), Ahle Sunnat Wal Jamah (formerly Sipah-e-Sahaba), the Majlis-e-Wahdat-e-Muslimeen (MWM) are the three political groups that have been hit most in the recent targeted killings across the city. The trend smacks highly of sectarian target killings, as ASWJ and MWM are both declared sectarian political parties. However, there was also a steep rise in the targeted killings of policemen and members of the Rangers in recent weeks.

The figures also suggest that ethnic killings, in vogue during the Pakistan Peopleâ€™s Partyâ€™s last government, has come down dramatically â€“ as a major political party, the ethnic Pashtun-led Awami National Party (ANP) was wiped out of the city in last yearâ€™s general elections.

â€œThe Pushtoon-Muhajir killings have markedly come down after the ANP disappeared from Karachiâ€™s political scene,â€ said Nafees. However, he did not suggest that only the ANP was responsible for the ethnic targeted killings. As the MQM, which represents the ethnic majority Urdu-speaking electorate in the city, were also allegedly involved in ethnic violence.

Experts say one explanation of the decline of ethnic violence could be that the Pashtun neighbourhoods are now taken over by religious parties like the ASWJ or groups with links to the Pakistani Taliban, who are more sectarian in nature. They have begun to treat their strongholds like business interests and are involved in extortion, land grabbing and other illegal activities like other political parties in the city.

Talking of Karachi violence, one cannot ignore the gang war in Lyari, which has its own dynamics. Since September last year, Lyari is absorbed in an internal gang war, which took the lives of more than a hundred people. A stronghold of PPP, as of today, Lyari is calm but peaceful. As a bloody war between Uzair Baloch and his former commander Baba Ladla had kept the neighbourhood hostage to incessant violence for months. However, on March 15, both the groups had called on a ceasefire after one of the clashes in which at least 19 civilians were killed. But locals say that the ceasefire is tenuous and violence can recommence anytime.

Voice of people on the ground

Peace activists largely blame the systematic weaponisation of Karachi over the years for the current violence. They say, back in the 1970s or even mid 1980s, Karachi was never armed. Some blame the dictatorial regimes for arming political parties. â€œBe it Zia-ul-Haq or recently Pervez Musharraf, the dictators usually go for a quick-fix, not contemplating the long-term implications of their decision,â€ said Farhat Parveen, the executive director of Now Communities that runs a citizen-centric campaign to de-weaponise Karachi.

â€œZia ul Haq had armed the Jamaat-e-Islami and Musharraf recently handed over the city to the MQM. The job of democratic parties is to take part in dialogue, but the dictators, for their short-term gains, had introduced the culture of violence, which sadly became the signature way how politics is done in Karachi today.â€

However, some see the violence in Karachi as a result of the way the city is evolving with the passage of time. â€œAll war is a war for the stomach,â€ said Ronald Dâ€™Souza, one of the leading civic activist and urban-planners of Karachi. â€œThe population of Karachi is exploding and due to various reasons, it cannot afford to sustain the population surge. So itâ€™s a clash of resources â€“ a fight for a better deal,â€ he said.

Dâ€™Souza believes that the various groups that are at loggerheads with each other in Karachi are basically fighting for their respective space, which he says, is a natural human phenomenon.

â€œThe 22 million people of the city are vying for a slice of the cityâ€™s resources. I believe had there been no Shias and Sunnis or Mohajirs, Sindhs or Pathans, we would still have invented some pretext to fight. Itâ€™s unequal distribution of resources and the lack of space for all the various communities living in Karachi which is causing this mayhem. Itâ€™s simple. Itâ€™s about the survival of the fittest,â€ he concludes.

A pretty decent summation, but someone has to find the solution for this senseless and unending cycle of bloodshed in Karachi â€“ as well as the rest of the country.

My CB Story: Bilal Masood from Pakistan
The Rape Epidemic
To Top