As Ukraineâ€™s new authorities unleash heavy weaponry on Slavyansk, blockading civilians in the town, the EU says it is â€œconcernedâ€ and has called on pro-autonomy protesters to end their â€œillegal actions.â€

The European Union, a fierce supporter of Kievâ€™s new authorities, said it is watching the events unfold in eastern Ukraine.

Kiev has intensified its military operation in eastern Ukraine, with the army surrounding the anti-government stronghold of Slavyansk, blockading civilians inside with military helicopters and APCs on Friday morning. Two pilots have died, and self-defense forces in Slavyansk said that one of their members was killed.

The Organization for Security and Co-operation in Europe (OSCE) has urged for the creation of humanitarian corridors for the civilian population, Andrey Kelin, Russia’s permanent representative to the organization, told RIA Novosti.

While Kiev has chosen the path of military strikes, the EU has called on anti-government activists and self-defense forces â€“ which have occupied government buildings in the city â€“ to end â€œillegal actions.â€

“Occupied buildings need to be vacated, all persons illegally detained need to be released, including the OSCE military observers,” Kocijancic said.

In February, as events unfolded at Kiev’s Independence Square, the EU spoke in a heightened rhetoric, â€œcondemning the violenceâ€ at the EuroMaidan protests.

Anti-government Maidan protesters threw stones at police as officers responded with tear gas and stun grenades. The violence resulted in many casualties. European Union foreign policy chief Catherine Ashton responded to the events in a February statement, saying she â€œcondemns all use of violence,including against public or party buildingsâ€ and urged the countryâ€™s political leadership to resolve the crisis. 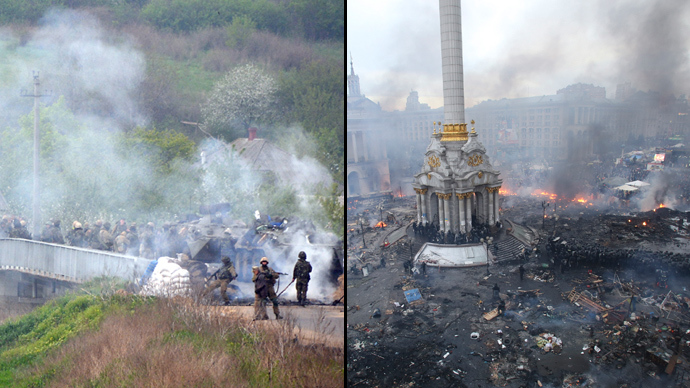 Regarding the Slavyansk military operation, Moscow now states that Kievâ€™s offensive has destroyed the last vestige of hope for implementing the Geneva agreement on de-escalating the Ukrainian crisis.

“While Russia is making efforts to de-escalate and resolve the conflict, the Kiev regime has chosen military aviation strikes on peaceful residential areas and started a punitive operation, literally destroying the last hope for the viability of the Geneva accords,â€ President Vladimir Putinâ€™s spokesman, Dmitry Peskov, said on Friday in response to the militaryâ€™s advancement.

Russia, the US, the EU, and Ukraine adopted a joint document on the de-escalation of the Ukraine crisis after talks in Geneva on April 17. One of the key points of the deal was the decision to refrain from any violence.

During a UN Security Council meeting in New York at the end of April, Russiaâ€™s envoy to the UN, Vitaly Churkin, said that Kiev had not taken any steps towards fulfilling the Geneva agreements. He also stressed that repressions against those disagreeing with Kievâ€™s coup-imposed authorities were continuing.

Investigative journalist Pepe Escobar told RT that the activists in eastern Ukraine are not pro-Russian and merely want to be more independent from the coup-imposed government, with which they disagree.

â€œThey are not pro-Russian, they want a united Ukraine, a federalized Ukraine, a Finlandized Ukraine that is not allied with the EU and NATO or with Russia; itâ€™s equidistant. And they want more autonomy in the eastern and southern provinces. This is what those ‘militants’ want in fact. And now they are being confronted by guns.â€

He added that sooner or later, the â€œUkrainian neo-Nazi, neo-fascist militias fighting for a bunch of regime changers in Kiev and using what is left of the Ukrainian army to attack and encircle a cityâ€ will be attacking civilians.

â€œWhere is the UN in all this?â€ he asked.