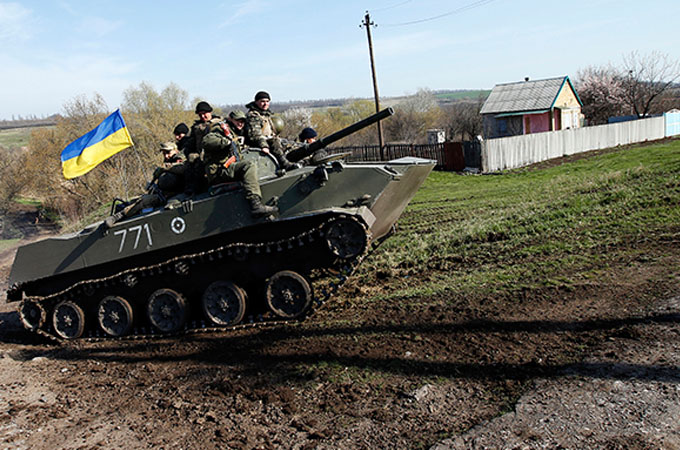 Kiev authorities must â€œimmediatelyâ€ deescalate the situation in southeast Ukraine by withdrawing its troops from the region, Russiaâ€™s Foreign Ministry has said, adding that Kiev must start nationwide talks and stop â€œdistortingâ€ the Geneva agreement.

â€œThe Russian side once again insists on an immediate deescalation of the situation in the southeast of Ukraine, the withdrawal of divisions of the Ukrainian Army and the start of a real inter-Ukrainian dialogue including all the regions and political entities of the country,â€ the Foreign Ministry said in a statement on its website.

Moscow is â€œsurprisedâ€ by Kievâ€™s interpretation of the four-sided Geneva agreement adopted by Russia, Ukraine, the US and the EU on April 17, it added.

Despite the call for disarmament of â€œall the illegal armed groupsâ€ specified by the agreement, Kiev, Washington and a number of European leaders â€œkeep harping on the necessity to â€˜hand over weaponsâ€™ [referring] only to the Ukrainian citizens defending their rights in southeastern Ukraine.â€ With that, the Western powers â€œare turning a blind eye to the ongoing provocative actions of the gunmen of the far-right groups, including that of the so-called Right Sector.â€

Such actions, which have been taking place in both the capital, Kiev, and in southeastern Ukrainian cities, â€œhave already led to death of people overnight into April 20,â€ the ministry said.

Russia continues to believe that the Western partners are â€œearnestâ€ in their stated commitment for the peaceful resolving of the Ukrainian crisis, the statement said. However, the facts â€œregretfully speak to the opposite,â€ it added. Kiev has not moved to enter a dialogue with the regions of Ukraine protesting against its rule, while the US officials have apparently chosen not to discourage the coup-imposed authorities in their â€œstrongarm ambitions.â€

Immediately after US Vice-President Joseph Biden ended his April 21-22 talks and left the Ukrainian capital, Kiev announced the renewal of the so-called â€œanti-terrorist operationâ€ in eastern Ukraine, the statement noted. Previously, CIA directorâ€™s John Brennanâ€™s April 13 visit to Kiev coincided with the start of the same military operation, it said.

The statements voiced by the Ukrainian oligarch and multibillionaire Igor Kolomoysky, picked by the Kiev authorities as the governor of the Dnepropetrovsk region, â€œlook even more absurd,â€ the ministry said. Kolomoyskyâ€™s deputy Boris Filatov recently announced a $10,000 bounty for each â€œRussian mercenaryâ€ captured and handed over to the Kiev-backed authorities and a $200,000 reward for each regional administration building freed. Filatov also said the servicemen at the Mariupol military base, who on April 16 killed three people and injured 13 more during an attempted storming allegedly inspired by the anti-government activists, have been paid 500,000 hryvnas ($43,000).