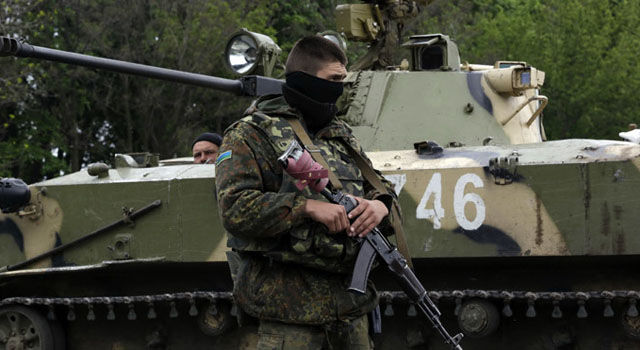 Ukrainian armed forces have opened fire on journalists from Russiaâ€™s LifeNews working near the city of Kramatorsk, eastern Ukraine, where fighting broke out between self-defense forces and Kievâ€™s army.

The shooting began around 1 p.m. as three members of a LifeNews crew tried to enter the village of Oktyabrskoe following the fighting. The village is located some 20 kilometers from Kramatorsk.

â€œWe saw that machines were gone and the shooting stopped like half-an-hour ago. We tried to enter the premises of the village to find out what happened to locals, if they needed help, and if there were wounded among them,â€ reporter Oleg Sidyakin told RT. â€œBut as we got closer to the outskirts of the village, we ran into an armored troop carrier with a Ukrainian flag on it and armed people in black uniforms. We were going in a car with ‘TV’ stickers, indicating that were are press. We stuck hands out of windows, but first there came one shot and then machine gun fire.â€

Sidyakin said he did not know where the shots were aimed â€“ in the air or above their heads â€“ but still decided to turn away and move to a safer location, in order to avoid provoking armed people.

â€œI had to make such decision because I could not put in danger the lives of a driver and a cameraman,â€ he said.

The LifeNews reporter said that local residents were shocked, stating that some of them hid in basements. Many still cannot return home. Sidyakin said that phone communication was cut off, which â€œas self-defense forces told us, is a sign of an ‘active phase’ of the military operationâ€ conducted by Kiev forces.

Fighting between Kievâ€™s army and local self-defense groups broke out in the afternoon near Oktyabrskoe.

â€œIt was around noon. The Ukrainian army was taking ammunitions to the city of Kramatorsk,â€ local resident Vladimir told RT, citing his friend Aleksandr, who lives nearby. â€œThere is the village of Oktyabrskoe, where there is a bridge [on the way]. Our self-defense blew up a vehicle with ammunition and set Kievâ€™s APC on fire,â€ he said.

According to Kievâ€™s Defense Ministry, a group of around 30 self-defense troops â€œambushed a convoy of armored vehicles of one of the military units.â€

The ministry said the self-defense group came to the scene beforehand and hid in bushes along the river.

â€œThe first shot from a grenade launcher targeted the engine of an APC, which came up to the bridge. There was an explosion. Another APC tried to pull away the damaged machine that caught fire further away from the village. The soldiers engaged in the fight,” the ministryâ€™s statement read.

Kiev says that six of its army fighters were killed and another eight injured, with one in critical condition.

Hours after the fight, self-defense units confirmed that they â€œdestroyed two of the enemyâ€™s APCs.â€ They also reported that one of their militiamen died.

“It is true that there was an armed clash,â€ the Kramatorsk self-defense unit told Interfax. â€œThe enemy retreated.â€

The fight near Kramatorsk is the latest in a string of local fights as Kiev continues to conduct its â€œpunitive operationâ€ against anti-government activists in southeastern Ukraine, which began May 2.

US flying manned intelligence missions over Nigeria in missing girls search, official says
14-year-old gangraped by four including brother and uncle in Nashik
To Top