Covid-19 pandemic has led to an increase in the use of technology. As a result, cyberbullying has increased as well. Just recently, an Instagram story is going viral about a 15-year-old kid getting bullied.

This kid suffers from mild autism, and the bullies did not even spare him. The victim’s sister took it to her Instagram story and talked about how her brother was getting bullied by a bunch of teenagers.

It is so heartbreaking to see how inhuman and insensitive the world has become. What is wrong with our youth? Do they not see the repercussions of their actions? This is downright ignorance and problematic.

Here are a few screenshots 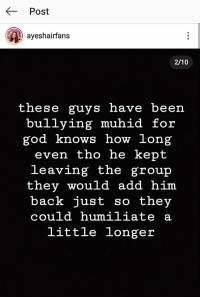 Now coming towards the victim, the kid named Muhid is mildly autistic who’s Instagram account got hacked. According to the stories circulating on the Internet, some indecent pictures were leaked from his account.

Not only that, but his sister also shares how she later found out about a group that he was added to. This group was made by 6-7 people who belong to Karachi. It was named ‘Lord of the D*cks’.

Muhid publically explained and apologized for the fake pictures that were sent from his account. However, the torture did not end there. He was later added to this group where he was repeatedly bashed and bullied. 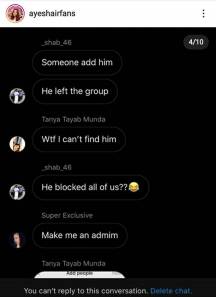 This torment lasted for about 4-5 months. Just imagine what the innocent kid was going through! You all must be wondering why he didn’t simply leave the group. Well, guess what? Obviously he left the group as soon as he was added to it. But the bullies continued to add him each time he left it.

Since this case of cyberbullying has gone public, let’s talk about how these bullies put this kid through hell. The bullies were relentlessly calling him names and shaming him with profane language. From the screenshots shared by his sister, one can see how cold-blooded these bullies are.

Let’s not forget the fact that the kid was suffering from autism!

This is a developmental disorder where the person has difficulties with social interaction and communication. There are also many other challenges the person faces with repetitive behaviors and speech. Imagine getting bullied and made fun of for something that is not even under your control. So disappointing.

For how long will these bullies get away with their inconsiderate behavior? They literally shattered the kid’s confidence. Not to forget the impact that bullying has on the victim’s mental health.

Do these people have nothing better to do than torture a poor kid? What’s the use of so many mental awareness posts circulating on the Internet saying ‘I’m here to listen’? These are the same people who perpetrate such actions!

No matter how much awareness you spread- as long as you don’t implement it, it all goes down the drain! Is this the new cool for these teenagers? If that’s so, there needs to be serious action taken against this.

If you know someone who’s getting cyberbullied, please report it. This is not the first case, just recently there was a case of Ahmed Shah getting bullied online. The society needs to take this seriously, and this won’t happen until and unless the bullies face consequences.