Politician Khurram Gandapur Made An International Joke Of Himself By Posting A GTA V Clip Mistaking It For Real!

The current political scenario of Pakistan is no less than any joke. If we only rewind this year, a line-up of hilarious mistakes from the country’s politics will pour in. Pakistanis are stunned on the politicians pulling out their extreme silliness when the country is already facing a crucial time.

Some time back, Pakistan’s ‘cat filter minister’ became a laughing stock during his official presser. Still, have no idea about it? No worries. Last month, Khyber Pakhtunkhwa (KP) Minister was turned into a cat when the digital team forgot to turn off the Snapchat filter during an official press conference. The ‘billi’ scene instantly went viral and people couldn’t hold their laugh back.

Well, in recent news, another huge blunder came out of Pakistan’s politics and this time it’s a big one. Pakistan Awami Tehreek (PAT)’s Secretary General Khurram Nawaz Gandapur tweeted a video game clip and thought it was something real; LOL. On July 5th, Gandapur tweeted Rockstar’s famous video game Grand Theft Auto (GTA) 5’s video clip and praised the pilot for saving everyone from a huge disaster by his instant decision making capability. What? Praising someone who doesn’t even exist?

Here’s the clip from GTA 5 which the politician thought was real!

This is what he had tweeted! 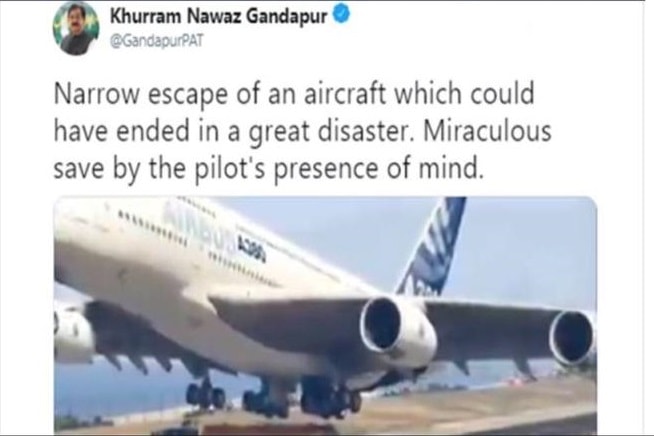 Well, Khurram Nawaz Gandapur was widely laughed off by the internet users as well as the international publishing agencies. The Independent, Vice, and several other platforms covered this hilarious mistake of the politician and obviously, the tweet was later deleted from his official Twitter handle. Many are still in shock that how can someone not differentiate between a video game and real life incident.

“The Independent” covering the mistake!

Maybe it’s not his fault as Rockstar Games has always been famous for its exceptional graphics plus the GTA series is considered to be the company’s best make till now. Well, the Pakistanis are now just hoping that nothing more foolish comes out of the country’s politics in future and that the political alliances work for the betterment of Pakistan.

Laughed out loud on the blunder? Let us know in the comments below!

Meet Lara – An Australian Woman Who Loves Pakistan, The Army And Its People Despite What Happened To Her!
This Careem Driver Saved His Passenger’s Life Becoming A Hero And We Need More People Like Him!
To Top