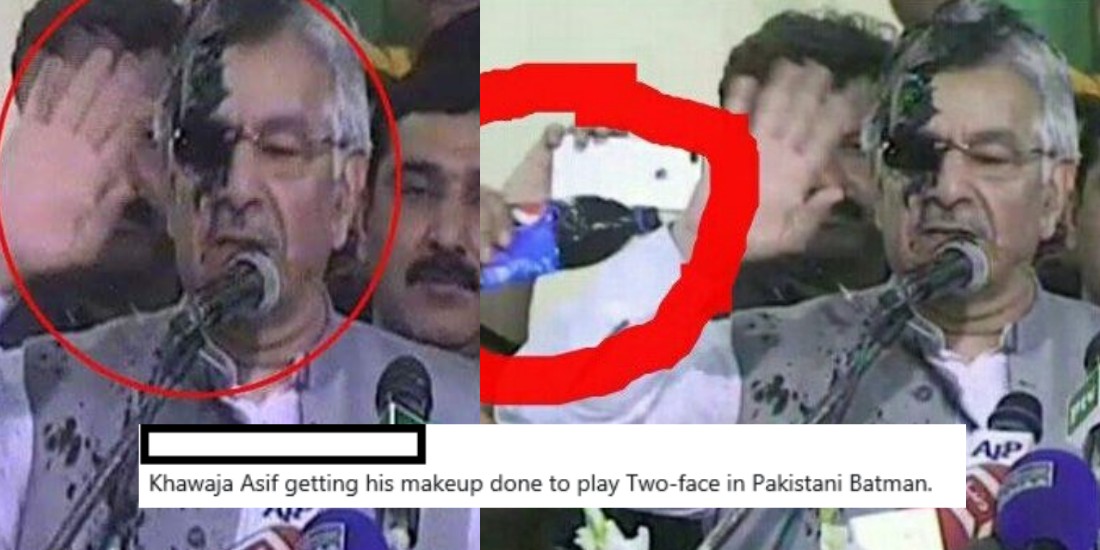 There have been several incidents in the past where politicians faced the consensus of choosing politics as their career. Some got hit by a shoe but dodged it while others got hit by reality right in the face. With the passage of time, people adopted new methods of showing their aggression and recently, Khawaja Asif became the victim of it.

INCIDENTS FROM THE PRESENT AND PAST

This incident took place on Saturday where our Foreign Minister, Khawaja Asif was addressing the workers’ convention of Pakistan Muslim League-Nawaz. It was going all fine until someone from the crowd threw black ink on Khawaja Asif. Considering it a crime, the police immediately took the person into custody. Although Mr. Asif asked the police to realize him as he has no enmity with him, he also added that the person was sent by someone but it will not affect his politics.

Someone pours an ink bottle over an unsuspecting #KhwajaAsif during PMLN's worker convention! pic.twitter.com/TMsLOnPWqT

As soon as this incident got shared on the social media, instead of people condemning it, it looked like a festival that has just started where each person was celebrating what just happened. Maybe because of the claims made by PML-N regarding all the progress that they have made that only THEY can see, which eventually has gotten many to turn against them and this was one of the depictions of how actually the public feels about them. Keep in mind that they are not the only ones. Some days back, the Interior Minister, Ahsan Iqbal also got hit by a shoe.

Here are some of the best reactions that gave many fits of laughter.

GRAB A POPCORN AND WATCH THE BLAME GAME

Khawaja Asif getting his makeup done to play Two-face in Pakistani Batman. pic.twitter.com/cLxnOyMeYv

POINT TO BE NOTED

They arrested man in no time and two ISF guys were killed in Punjab recently and there have been no arrest so far https://t.co/JVL00P437L

Video of the year pic.twitter.com/Adv7PTBsOR

Everyone who is a bit sane could get the hint by PML-N as to who were they putting the blame on. But hard luck for them, yet once again, as the person wasn’t who they imagined him to be. As per the sources, the suspect’s name is Faiz and he is from Muzaffarpur. He released that he did this because of the changes to Finality of Prophethood clause.

Every person who went out to support Khawaja Asif also got trolled by many, be it Maryam Nawaz or Hamid Mir. However, as time passed, people realized that this is not just fun and games but a serious happing that needs to be condemned. Despite the differences, these acts should not occur, instead, such people should use the same ink to vote for the right person. If you liked the article then like, share and comment down below to give us your feedback.

Read Also: Once Again, Khawaja Asif Called Someone “Tractor Trolly” And Lit The Internet On Fire