The vogue of resignation is very much famous in the Muttahida Quami Movement Pakistan. But the recent one has somehow discomforted the federal government as the foundation of the current government is dependent on the “Ittehadis.”And MQM-P is one of them.

Apparently, the political environment has heated up in the federal capital as Khalid Maqbool Siddiqui resigns from his ministry.

The government got shocked after the Federal Minister Of Information and Technology, MR Khalid Maqbool Siddiqui, stepped back from his position. The former minister is the senior leader and convener of the Muttahida Quami Movement Pakistan. However, he leaves the federal cabinet because of “unfulfilled promises” by the Federal Government. 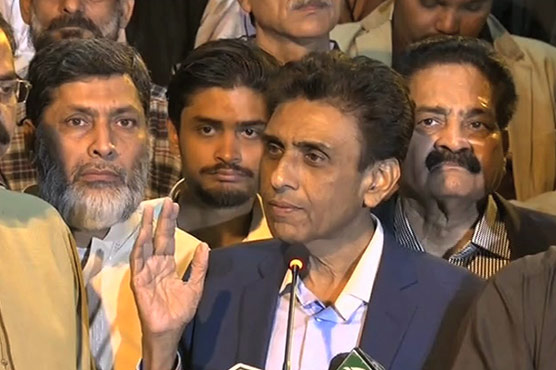 On Sunday at a press conference, the former minister talked to the media and informed about his decision. He further clarified that his resignation from ministery would not affect their alliance with the government. He added, despite all the reservations, the MQM-P will continue to support the federal government without becoming part of the federal cabinet.

“The MQM-P’s Rabita Committee in a meeting on Friday reviewed the alliance with the PTI in detail and agreed to leave the ministry,” he said. “It was useless to have a ministry in the Centre when no one is interested in resolving the issues of Sindh’s urban centers, including Karachi and Hyderabad.”

Although sources have claimed that the reason behind the move is, they want to pressurize the Federal Government so that they can gain another ministry. However, the party believes their ministers are not able to represent MQM-P completely. Mainly, Farogh Naseem, who is currently working as a Minister of Law and Justice for the Federal Government, has shown his concern as well.

Moreover, the party is also demanding that the government should include Aminul Haque and Iqbal Muhammad Ali Khan in the federal cabinet and also allocate them key ministries.

However, after the surprise announcement by former IT Minister, it is astonishing that the temperature of the government corridors is soaring. Prime Minister Imran Khan has advised his leaders to communicate with the MQM-P leaders and solve their issues as soon as possible. He said he supported MQM-P’s demands and stance and tried his best to counter their problems.

However, the MQM-P’s stance is very clear; they said the lack of seriousness on the matters left them no choice. Now, it’s  time that the Federal government showed some seriousness on the issue because MQM’s seven members are very precious for them. They have a decisive role in the formation of the government.

Amid all, Chairman PPP Bilawal Bhutto Zardari had offered the MQM ministries in the Sindh government if it supports PPP to topple the PTI government in the center.

Pakistani Expat In Dubai Becomes A Hero For An Indian Girl!
Brace Yourselves Karachiites, The Coldest Weather Of Your Life Is Here!
To Top