First Alleged Case Of Coronavirus In Pakistan Erupts From Sindh!

The emerged coronavirus from China’s Wuhan city has, until now, infected various parts of the world becoming a severe threat to human life.

To ensure safety for the Pakistani citizens, earlier, the authorities had suspended all Chinese flights arriving in the country. This week, after the resumption of flights from China, among others, returning, a student is currently under isolated treatment.

Khairpur student put in an isolation ward after returning from China!

Well, Pakistan along with other countries rescuing their nationals also brought back home several students.

Yesterday, 57 Pakistanis returned home on the first flight after the coronavirus epidemic and cleared through screening. However, on Monday, a student from Khairpur, who recently returned has been put up for quarantine after the identification of novel coronavirus symptoms.

Apparently, the arriving Pakistani started feeling sick whilst at the transit point in Qatar but didn’t realize the danger coming. According to local media reports, Shahzaib Rahujo, resident of Nangerji village in Khairpur came back home last Saturday. Studying petroleum at a Chinese university, on Monday, Rahujo was shifted to an isolation ward after his nose started bleeding.

”He was experiencing a headache, flu, and cough when he reached Qatar!”

Speaking on the condition, Rahujo’s elder brother Irshad Ali complained about the ill-treatment of the doctors provided. Explaining the scenario, Ali said, ”He was experiencing a headache, flu, and cough when he reached Qatar. He took some medicine to relieve the symptoms and was able to reach the village safely”. 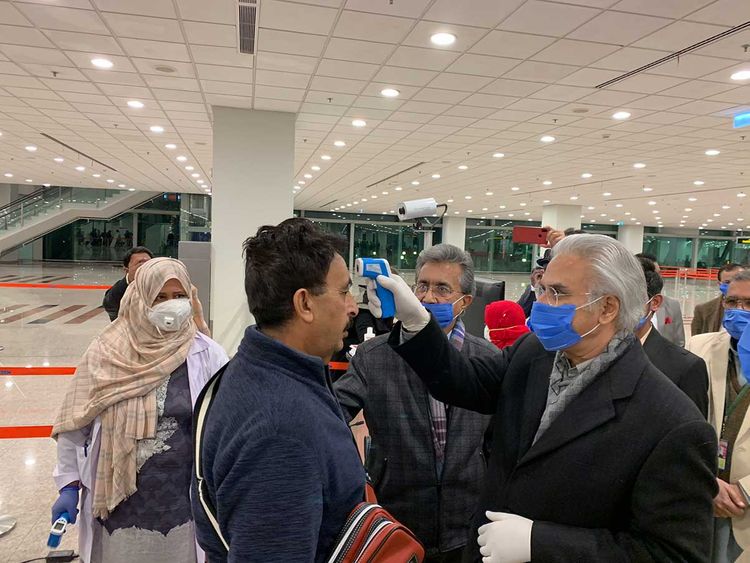 Later, after the student’s nose kept running, his family immediately took him to Khairpur’s Civil Hospital for treatment.

Because of the lack of medical facilities, the present Health officials at the hospital instructed the family to shift him to Karachi. As soon as the family was about to leave for Karachi, the medical staff at the Civil Hospital called them back and put the affected in quarantine.

”They put him in a dengue ward!”

On the matter, the brother, Irshad Ali stated, ”We were on our way to Karachi when they [hospital] told us to come back to the Civil Hospital [Khairpur]. There, they put him [Shahzaib] in a dengue ward. [The minister] wanted the patient [Shahzaib] to remain in isolation until his tests were completed. But there is no doctor and we are not being treated properly”. Not only a bad treatment, but the hospital didn’t even provide the family or the patient with proper instructions or covering masks.

Looking over the increasing numbers, Pakistan is also now capable of diagnosing and treat coronavirus patients. The severe consequences have even led to the World Health Organization (WHO) which has declared the widespread virus ‘global health emergency’.

What do you think of the implementation? Tell us in the comments section below!

Epic Responses Of Celebrities About Social Media On “The Epic Show”!
Artist Creates Virtual Traffic Jam on Google Maps With 99 Smartphones
To Top