On Tuesday, we did a story about an incident in Kasur where a human finger was found in a chicken burger at a local restaurant. The news of the incident went viral on social media. we have some more revelations on this matter in this story.

Shahzaib Latif, who accidentally had the taste of the human finger, is now being contacted by various media houses to give his comments on this matter. Recently, Daily Pakistan contacted him and Shahzaib told them that he got the burger home delivered from a restaurant called Chick Boss.

While eating the chicken burger, Shahzaib felt the presence of a bone in his mouth. When he pulled it out from his mouth he found out that it was the front of a human finger in chicken burger. As soon as he saw this, Shahzaib’s health deteriorated and he started vomiting. 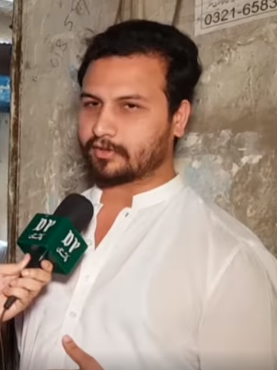 Shahzaib said that he contacted the Punjab Food Authority (PFA) and requested them to investigate the matter. The PFA visited the restaurant and seized the burger patty as important evidence for the sample. They vowed to take action against the restaurant after receiving the forensic report of this incident. The PFA later asked Shahzaib to contact the local SHO to look into this matter.

Shahzaib also went to the local police and asked the SHO to take action against the relevant food point. In a shocking reply, the SHO asked him what does he want to investigate through this matter. He told the SHO that in the name of fast food, the human finger in the meat had raised a question mark. Shahzaib is now demanding a full investigation into this critical issue.

Daily Pakistan also interviewed the owner of the restaurant Chick Boss. The owner said he orders burger patty from a specific vendor. The owner complained about the patty vendor regarding the issue and was also concerned about the health of his customer.

Local Police unconcerned about the issue

The team of Daily Pakistan than went to the local police station in Kasur to meet the SHO. To their surprise, the SHO was having a chit chat with local police officers during duty hours. Rather than focusing on the duty, the SHO was concerned about what to give his senior police officer as a gift for farewell. The team asked the SHO for the human finger incident. In reply, the SHO said that it’s not of his concern as he can’t do anything about this matter.

The incident of Shahzaib Latif does raise questions over the transparency of food outlets in Pakistan. Even though PFA has made claims that it is making efforts to provide the local citizens with quality food, yet the practice is continuing unabated across the province. Discovery of meat of prohibited animals such as horses, donkeys, and even pig’s meat has been found in raids conducted by PFA.

What Happens If You Die In The Month Of Ramadan?
Veteran Bollywood Actor Rishi Kapoor Passes Away At 67
To Top