It has not been a year yet when India forcefully removed article 35A and 370 from its constitution. Furthermore, the repercussions of the Kashmir fiasco are far-reaching. As per reports, Freedom fighters in Indian held Kashmir, in Handwara district killed several soldiers.

According to reports, the freedom fighters killed one colonel, one major along with two of their juniors and sub-inspector.

As per Indian media, the Indian army and police went to operate against Freedom Fighters after getting news that they have held hostages. However, the picture is not clear yet the only certain thing is freedom fighters killed the army personnel for their brutality and genocide against Kashmiris. 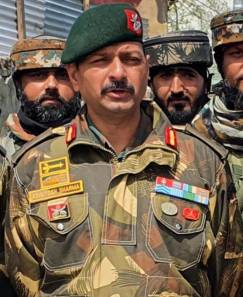 Since the revocation of article 370 and 35A, there is a complete lockdown in Kashmir. Following that, Kashmiris are in constant adversity living without media, and basic necessities.

According to United Nations resolutions, Kashmir is a disputed matter. Nevertheless, India fetched the disputed territory into its internal land. Consequently, the freedom fighters protested. When their protest was not enough and reportedly the Indian army brutally killed innocents, they took guns and started fighting the Indian Army.

Indians as always, saying  Pakistan has conspired the attach against India. However, Kashmiri’s are celebrating the victory on social media platforms.

In the next few days, the Indian Army will come for retribution, young military age Kashmiri boys will be abducted, taken to the woods and executed, AK47s, packets of Pakistani biscuits will be planted on them, pictures will be taken and sent to the Indian Media. #Handwara

Many appreciating the freedom fighters

When no radio contact could be established with the team despite several attempts, a phone call was made to Col Sharma’s mobile. The call was answered by a freedom fighter with an “Assalamualaikum”. 💥
More power to Freedom Fighters 😘#Handwara #Kashmir pic.twitter.com/B3jymFUMmC

Aditya Raj Indian journalist saying Pakistan did this! When they fail they blame Pakistan

They are not militants.
They are Pakistan sponsored terrorists trained by Pakistan Army and the ISI.
How hard is it to report factually? Don’t legitimize the terror industry. #Handwara pic.twitter.com/9z0fYdWFGn

‘Indian Army can never win this war against the resistance’

A Colonel, a Major and a sub-inspector were killed&two freedom fighters were martyred during an 18-hour anti-militancy operation in Indian occupied Kashmir #Handwara
Indian Army can never win this war against the resistance. You can never defeat them. They resist to LIVE..!

‘India could not control our fearless freedom fighters’

After successfully strike in #Handwara #Kashmir now Alhamdulilah we can see rising of great freedom fighters on ground once again.
Endia could not control our fearless freedom fighters. Fight for the right is much better than die in the fake encounters.