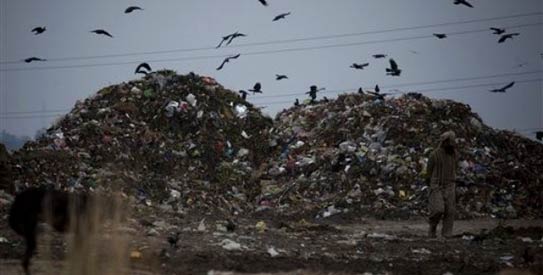 Take a drive in Karachi – in almost any area, be it a slum or a rich and posh neighborhood, you will witness a commonality. No, we are not talking about the deep fried ‘Aloo kay Samosay’: we are referring to the heaps of trash that has become a normal sight around the huge metropolis.

Garbage in Karachi can be found in various forms. It can be lying idle for weeks waiting for a final disposal, burning in flames spreading harmful gases or scattered around as if they are jewels of the city; whatever the form – with the government’s ignorance, trash in Karachi continues to grow and a possibility of it becoming a permanent feature of the landscape is just getting stronger.

The Karachi trash is unarguably a part of life in the city, so much so that it already has started to become a proverb… Case in example:

There are no accurate figures of the quantity of waste Karachi generates, it is estimated that the number could reach to thousands of tonnes. While the government ignores the plight of Karachi’ites suffering from the toxic fumes of garbage, few NGOs have tried to find a solution: one with the name ‘#Fixit.’ Though they have tried to do as much a private organization can do and have done a wonderful job, however, without the kind of resources a government has, no private organization can make a lasting or any significant impact in the world’s 5th largest city.

Distraught and angry, yet hopeful: people of Karachi still find a way to mock the situation in their own ‘Karachi-way’

Though Sindh’s new chief minister promised to follow a path different from his predecessor; not much has changed about the plight of Karachi garbage. The mega-city continues to witness trash lying around for weeks and months in dumps, passages, and other open spaces. Some of that waste is burnt and thus ends up spreading noxious smoke choking the entire neighborhood.

While the government is to be blamed for the mess, people of the city also share some responsibility. If Karachi’ites act responsibly and reduce waste, learn about recycling and acting upon it, a lot of poisonous waste won’t end up existing. This is being echoed by many who wish for a cleaner and greener Karachi.

We are worried about heaps of garbage in karachi..asking ourselves, do we 'throw' or 'produce' garbage responsibly? #KarachiGarbage

Environmental concerns of such waste don’t improve the situation either. The dumped waste rots and ends up producing harmful methane gas which in turn damages the environment and negatively affects the ecosystem. When burnt, plastic produces a harmful substance called dioxins causing air pollution and may eventually lead to acid rain. The ash from such burning contains heavy metals and other toxic substances causing major environmental concerns.

Due to pollution, many birds have stopped making their way to the skies of the city. Birds that were native to the city, the beautiful White-cheeked Bulbuls, Koels, Vultures, Jacanas, and the rest: the birds that once made the Karachi skies delightful, all have disappeared. Many other common birds have also found a home elsewhere such as sparrows, house crows, mynahs, doves and many more…

There are statements, there are decisions, sometimes the city authorities decide (on paper) to pick up the trash and other times, like just this past week, they hire foreign companies to do the job.  Last week a Chinese company, ‘Wuzung’ was hired to collect waste from house to house in Karachi. No time has been given about when the company will start working though few reports suggest that it will be at the beginning of next year.

Is this another statement which will never materialize? Time will tell. Will the people of Karachi try to reduce waste? Time will confirm. Will we ever get the cleaner and greener Karachi of old? Again, time will be the best judge.

Parents Do The Perfect Thing By Not Allowing Their Daughters To Accomplish Their Dreams
Things You Need To Know About The New COAS & CJCSC Of Pakistan To Upgrade Your GK!
To Top