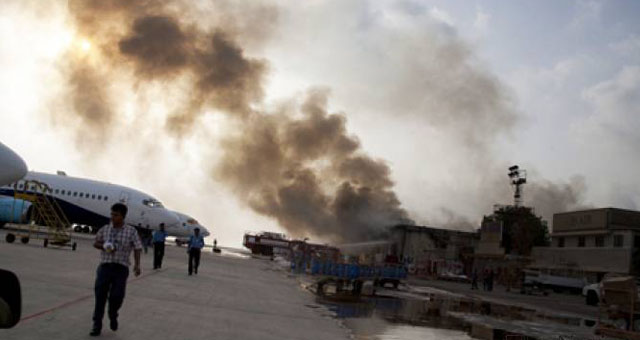 Karachi- Gunmen attacked one of Pakistan’s biggest airports on Sunday night and at least 23 people were killed, including all 10 of the attackers, media reported. A blast was heard and smoke was seen coming from the airport today morning, no damage has been reported so far.

Gun battles went on for several hours and television pictures showed fire raging at the airport as ambulances ferried casualties away, but by today morning, the army said the airport had been secured.
“(The attackers) were confined to two areas and eliminated,” military spokesman Major-General Asim Bajwa said.

A spokesman for the Civil Aviation Authority, Abid Qaimkhani said: “Four to five terrorists have managed to reach the runway, they are heavily armed with ammunition and grenades and Airport Security Force commandos have cordoned off the area along with police and rangers.

“A gun battle is continuing between terrorists and forces,” he added.

A paramilitary ranger engaged in the operation said the militants had entered through the Engineering Section of the Pakistan International Airlines near the airport’s old terminal.

“They gunned down the ASF security before entering,” he said.

Army spokesman Colonel Nayer said that troops had been deployed from the Malir cantonment near their airport. “They have reached the scene,” he said.

Broken glass and used gun magazines littered the engineering section where the first exchange of gunfire had taken place as smoke from grenade attacks began to die down.

Eye-witness Sarmad Hussain, a PIA employee said: “I heard fierce firing and then saw the terrorists firing at security forces. I don’t know a lot more than that. Thank God I am alive, this is very scary.”

A police official who did not wish to be identified said an unexploded rocket-propelled grenade had been recovered.

The director of the city’s main Jinnah Hospital, doctor Seemi Jamali said that five dead bodies had been brought in and the hospital had declared an emergency.

She added that three were ASF personnel and two were civilian employees of PIA, and that seven others had been wounded.

A spokesman for PIA, Mashud Tajwar added that two domestic flights bound for Karachi had been diverted to nearby airports.

There was no immediate claim of responsibility, but Pakistani Taliban militants, allied with but separate from the Afghan Taliban, are battling to overthrow the Pakistani state and impose their hardline vision of Islamist rule. However, today, TTP has accepted the responsibility of the attack.

Earlier, officials said all flights had been diverted.

Peace talks between the government and the Pakistani Taliban have failed in recent months, dampening hopes of reaching a negotiated settlement with the insurgency, which continues attacks against government and security targets.

Taliban gunmen attacked a Karachi naval base in 2011, destroying two US-made Orion aircraft and killing 10 personnel in a 17-hour siege.

Taliban and other militants in uniform carried out a similar raid at Pakistan’s military headquarters in the garrison city of Rawalpindi in 2009, leaving 23 dead.

Is this the world’s first emo robot?
Indian Arms And Ammunition Found in Karachi Airport Attack(VIDEO)
To Top