Karachiites Shamelessly Violating Lockdown With 7 People On One Bike

Despite the imposition of strict lockdown by the Sindh government, roads are seen flooded with cars and bikes in Karachi. It is quite shameful to see citizens defying the orders of the governing bodies and risking many lives.

Previously, after analyzing the situation, Chief Minister Sindh, Murad Ali Shah extended the lockdown for another two weeks. However, Karachiites still doesn’t seem to take the deadly coronavirus seriously. Currently, a series of video clips from the metropolis’ Korangi area are circulating on social media in which the Sindh police are ordering them to return to their homes.

Check out the non-serious attitude of the citizens

It is indeed disturbing that people not only are risking their health but are a threat to others as well. Speaking of the viral clips, most of the violators are seen traveling without proper safety equipment with their families. As per details, they were coming from the Korangi area and were going towards Sea View, Clifton.

The viral videos have been recorded by the deployed officers of Sindh police who were doing their duty exceptionally. In such a grave situation, when the whole world is locked in their homes, Karachiites are roaming without any worry. However, the government is tirelessly creating strategies to keep control of the virus and prevent it from spreading further.

According to media reports, Sindh has even made arrests in Karachi for violating the implemented safety protocol. So far, more than 2,000 Karachiites have been handcuffed since the lockdown was initiated. The numbers were given out by the Chief of Police, Karachi who is urging the citizens to stay indoors and avoid unnecessary outings during the lockdown.

As per recent stats, Pakistan has been fortunate enough in combating coronavirus till now. Particularly, the recovery rate in the country is much better as compared to other developed ones who are more advanced, technologically. The latest data reveals that more than 1,600 coronavirus patients have been fully recovered till now and are sent to their homes. 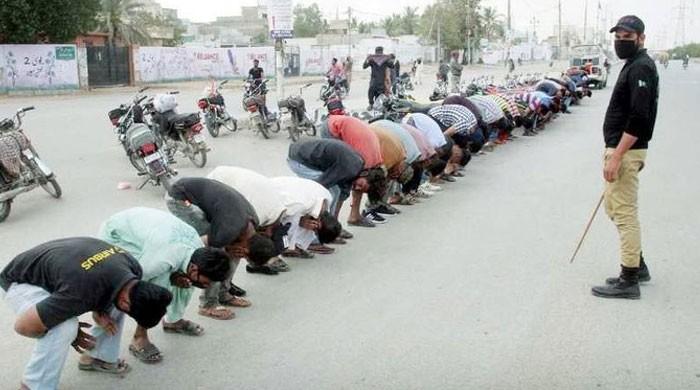 Well, it doesn’t mean that Pakistanis should take it lightly as the confirmed cases have now surpassed 1,700 and are increasing. In such turmoil, the doctors and other health officials are literally a messiah for the people. Their untiring efforts and constant services have kept many safe, from the contagious virus.

What do you think of the negligence of Karachiites? Let us know in the comments section below!